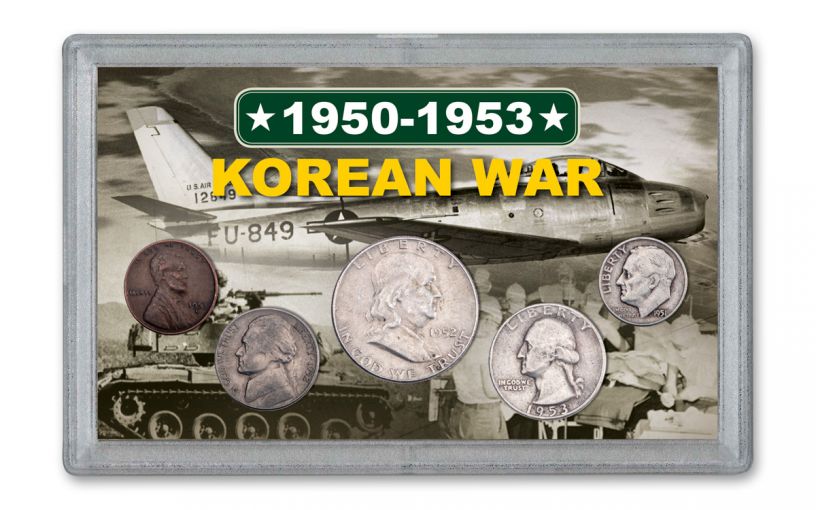 Availability: In Stock
This item will ship within 2 business days.
Item #
348000
Add to Wish List Add to Wish List Wishlist is for registered customers. Please login or create an account to continue. Add to Compare
Recommended Products
Product Description

Honoring the Veterans of the Korean War

Located near the Lincoln Memorial on the National Mall in Washington, D.C. are 19 stainless steel statues that seem to emerge as spectral forms each morning to remind us not to forget their sacrifices. They are the centerpieces of the Korean War Memorial and these weary-looking, dog-faced soldiers represent all those who served in the war. The three-year conflict that began just five years after the end of World War II is known as the “Forgotten War.” What can’t be forgotten is that it resulted in 36,574 dead and 103,284 wounded in such obscure places as the Chosin Reservoir, Inchon, the Pusan Perimeter, Heartbreak Ridge and Pork Chop Hill.

Now, to pay tribute and honor the veterans who answered the call during the Korean War, we’ve assembled a five-piece set of coins all dated between 1950 and 1953. These are coins that would have circulated in America during a time when the United States and its allies fought against the forces of North Korea and China to prevent the spread communism across a planet still recovering from the horrors of the Second World War.

In this set you’ll receive a Lincoln Cent, a Jefferson Nickel, a Roosevelt Dime, a Washington Quarter and a Franklin Half Dollar – all in nice Very Fine (VF) condition. Three of the coins – the dime, quarter and half dollar – come struck in 90% silver, a practice ended by the U.S. Mint in 1965. In addition, the entire set comes housed in a custom holder. As a special bonus, you will also receive a genuine Military Payment Certificate (MPC) that likely circulated among our troops during the Korean War.

This set makes a great gift for any veteran or military history buff and makes sure that the valiant sacrifices made by our military personnel during that hard-fought war are never forgotten. Order yours today.