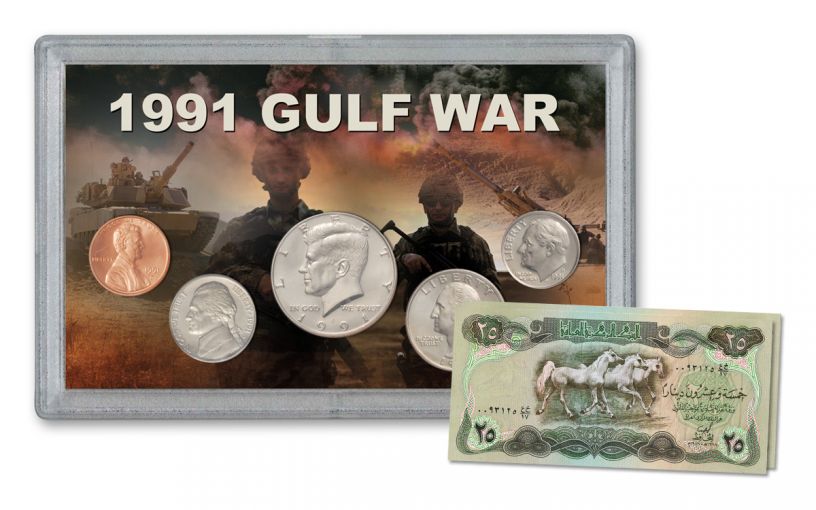 Availability: Available for Order
This item will ship 02/17/21
Item #
348542
Add to Wish List Add to Wish List Wishlist is for registered customers. Please login or create an account to continue. Add to Compare

Iraq was in massive debt, mostly due to its war with Iran. To help pay off that debt, dictator Saddam Hussein invaded the neighboring nation of Kuwait in order to seize funds. The United States and its allies came to Kuwait’s rescue, fighting back the Iraqi forces. The decisive victory was the fruits of a U.S.-led coalition of 35 nations that was the largest military alliance since World War II. The build-up phase codenamed Operation Desert Shield began in August 1990 and saw more than 700,000 American troops deploy to Saudi Arabia. The combat phase known as Desert Storm began in January 1991. After five weeks of surgically targeting Iraqi forces through airstrikes, ground troops expelled the Iraqis from Kuwait in a lightning strike codenamed Operation Desert Sabre that lasted just 100 hours.

This seven-piece set honors the veterans of the Gulf War by bringing together the 1991-dated Lincoln Cent, Jefferson Nickel, Roosevelt Dime, Washington Quarter and Kennedy Half Dollar, all in Brilliant Uncirculated (BU) condition and housed together in a custom holder. Completing this set, you’ll also receive a 25 Dinar Iraqi “Emergency Banknote” issued during and after the war, as well as a 1991 Safe Conduct Pass note. These latter pieces of propaganda, which look like an Iraqi banknote on one side but display the words “Safe Conduct Pass” in English on the other, were often air-dropped by Coalition forces to encourage Iraqi soldiers to defect.

Led by Defense Secretary Dick Cheney and Generals Colin Powell and Norman Schwarzkopf, the American Military demonstrated that it was the most advanced and lethal fighting force in the world. In fact, during the four days of the ground campaign, not a single American soldier was killed by enemy fire. So dominant was U.S. firepower and tactics that the enemies of today’s America learned a vital lesson: Never, ever take on America in conventional ground combat.

It’s been nearly 30 years since America helped rid Kuwait from the scourge of Saddam Hussein. This 1991 Gulf War Coin and Currency Set is a fascinating must-have for students of history, military buffs or veterans and families of veterans who served during the war. Order your set today!