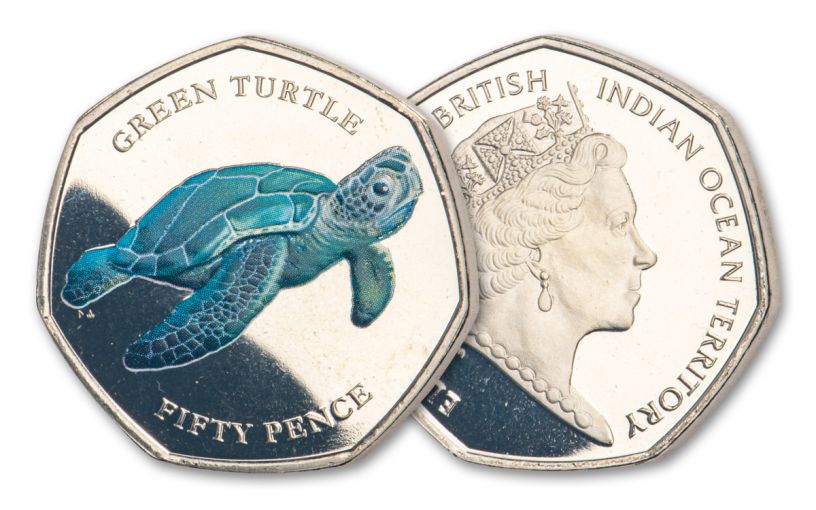 Availability: In Stock
This item will ship within 2 business days.
Item #
353697
Add to Wish List Add to Wish List Wishlist is for registered customers. Please login or create an account to continue. Add to Compare

From his first appearance in Disney/Pixar’s 2003 film Finding Dory to his most recent role in its 2016 sequel Finding Dory, the hipster Green Turtle named Crush has shown that he’s more than meets the eye. With his surfer dude’s attitude, he’s anything but what one would expect from a 150-year-old sea creature. Actually, scientists estimate that the average lifespan of a Green Turtle is a human-like 80 years, but they do have some documented cases of these turtles living as long as 150 years. It seems Crush and his laid-back bro-cha-cho ways is conducive to a long life!

Now you can let one of these graceful and exotic sea creatures kick back and become a bodacious addition to your collection thanks to this awesome legal-tender proof coin that features this endangered species in full color! Struck by the world-renowned British Pobjoy Mint in eight grams of gleaming Cupronickel (CuNi), this 50-pence coin was expertly crafted from hand-selected planchets, polished dies and multiple strikes to produce beautifully frosted details rising over mirror-like fields.

The seven-sided coin depicts a drowsy Green Turtle in brilliant shades of, well, you guessed it – green! What’s more, this is the first release in Pobjoy’s Turtle Series. It’s also legal tender in the British Indian Ocean Territory (BIOT), an area that plays an important role in the life of many of the world’s sea turtles thanks to the territory’s shallow inlets which provide much-needed foraging ground for immature turtles.

Green Turtles are one of the world’s largest sea turtles and the only herbivore among the different species. They can reach up to 5 feet in length and weigh as much as 700 pounds. Though not really green, these weighty reptiles have shells that are normally brown or olive in color. They also have paddle-shaped flippers that make them powerful and graceful swimmers when, like Crush, they’re riding the rollicking East Australian Current, in which thousands of aquatic creatures are swept from the Great Barrier Reef to Sydney Harbor and further south every summer. Despite their endangered classification, however, they are still threatened by overharvesting of their eggs, hunting of adults, being caught in fishing gear and the constant threat of habitat loss vital to their beach nesting sites.

If the 2019 BIOT 50-Pence 8-gm CuNi Green Turtle Colorized Proof doesn’t get you to come out of your shell, nothing will! Add one of these aquatic coins to your collection today!