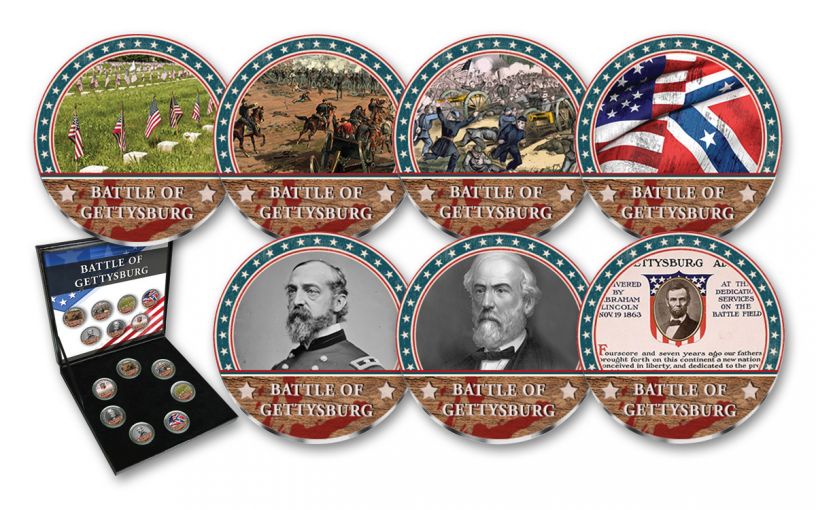 Availability: In Stock
This item will ship within 2 business days.
Item #
356781
Add to Wish List Add to Wish List Wishlist is for registered customers. Please login or create an account to continue. Add to Compare

The greatest battle ever fought on American soil was started over sore feet. That’s right, the Civil War Battle of Gettysburg was triggered when soldiers from the Army of Northern Virginia descended on a small Pennsylvania crossroads village in search of a rumored supply of shoes that were badly needed by the Confederates.

Today, the battle fought nearly 160 years ago is rightly remembered as the climactic battle that represented the highwater mark for the Confederacy as well as sealed the South’s eventual defeat. It also spawned President Abraham Lincoln’s famous Gettysburg Address, one of the most important and influential speeches in American history.

Now you can pay tribute to the decisive battle with this spectacular seven-piece set of cold enamel medals that commemorate the battle’s significant people and events. Cold enamel is a pigmented epoxy resin which gives the effect of enamel without the use of high temperatures. The resulting finish is attractive, durable and resistant to the wear of frequent handling.

The designs in this colorful set feature such unforgettable events as Pickett’s Charge when Confederate General George Pickett’s division briefly broke the Union Lines on the final day of battle only to be repulsed with a huge loss of men and material. Other designs show the Soldiers National Cemetery, Confederate Commander General Robert E. Lee, Union Commander General George Meade, American & Confederate flags, and a snippet from Lincoln’s Gettysburg Address.

This comprehensive set is an absolute must-have for students and aficionados of the Civil War. Secure one for yourself or for anyone on your list that would appreciate the monumental history represented by this colorful collection.