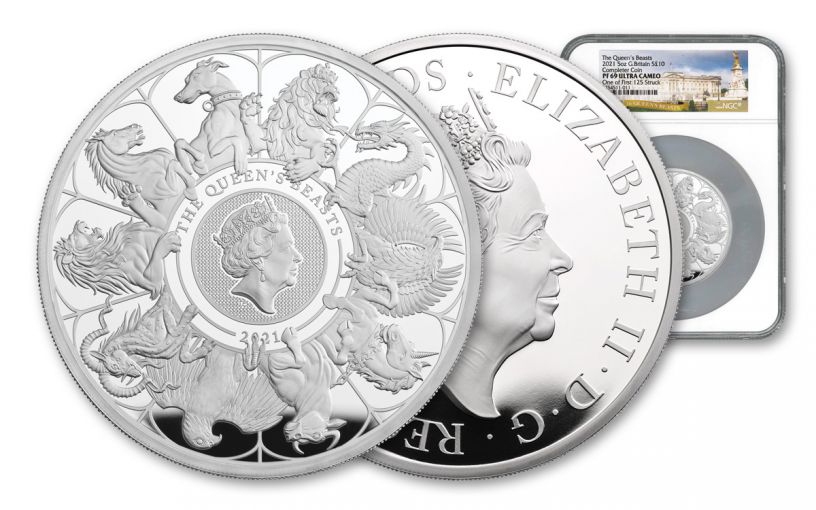 Availability: Call-In Only
This item is only available on a Call-In basis. Please call 1-800-510-6468 to speak to a representative.
Item #
422716
Add to Wish List Add to Wish List Wishlist is for registered customers. Please login or create an account to continue. Add to Compare
Recommended Products
Product Description

The Queen And Her Ten Guardians

Struck in five full ounces of highly pure 99.9% fine silver, this legal-tender £10 (ten pounds) coin was designed by Royal Mint engraver Jody Clark, the same artist responsible for all 10 Queen’s Beasts designs as well as the current effigy of Queen Elizabeth II. The fascinating design features all 10 beasts — the Lion of England, the Unicorn of Scotland, the Red Dragon of Wales, the Black Bull of Clarence, the Falcon of the Plantagenets, the Yale of Beaufort, the White Lion of Mortimer, the White Horse of Hanover, the White Greyhound of Richmond, and the Griffin of Edward III — circled around the effigy of Queen Elizabeth II. The obverse similarly features the effigy of the queen.

Perfect Proof Coins From Among The Very First Struck!

The beauty of this design has been made even more superb thanks to the coin’s gorgeous Proof finish that features beautifully frosted details rising over mirror-like fields. In fact, each coin available in this offer has been graded by the Numismatic Guaranty Corporation (NGC) as being in flawless Proof-70 Ultra Cameo (PF70UC) condition, a distinction that means these perfectly-graded proof coins have ZERO imperfections — showing all features and fields exactly as the engraver and mint intended. Plus, NGC has further pedigreed that these coins were “One of First 125 Struck.” Each will also come sonically sealed in an acrylic capsule with an exclusive Queen’s Beasts label.

Just 435 of these amazing proofs were ever struck and quantities are severely limited. So, don’t delay; order your 2021 Great Britain Five-Ounce Silver Queen’s Beasts Completer Proof now before our small allotment disappears!

Complete your Queen’s Beast series with this 2021 Great Britain £10 Five-Ounce Silver Queen’s Beasts Completer Proof — the eleventh and final coin in the popular series that began in 2017. Quantities are limited so order yours today!