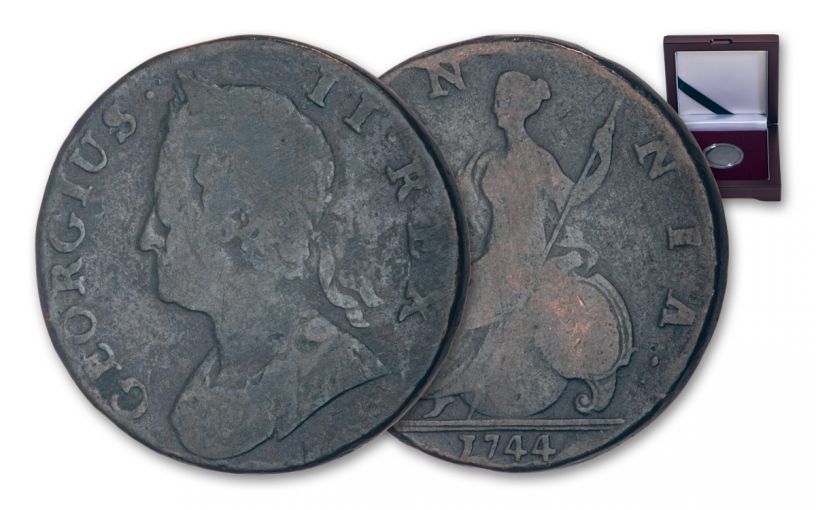 Availability: Out of Stock
This item is currently Out of Stock. Please sign up to be notified if this product becomes available.
Item #
354200
Add to Wish List Add to Wish List Wishlist is for registered customers. Please login or create an account to continue. Add to Compare

In 1727, a new king took his place upon the throne in Great Britain. George II had become the new monarch... and five years later, America’s first president was born. Named after King George, George Washington even served the British Crown as an officer in the British Colonial Army during the French and Indian War. Washington’s allegiance to his namesake did not extend to George II’s successor, King George III. The new King George’s tyrannical policies led to American colonial leaders establishing a new nation – and choosing George Washington to lead them.

This British Copper Half Penny features George Washington’s namesake; Great Britain’s King George II. Struck between 1727 and 1760, each coin available in this offer is at least 259 years old. The coin’s reverse depicts a seated Britannia, the allegorical symbol of Great Britain. These coins circulated throughout the reign of King George II in both America and Great Britain before the Revolutionary War making them important pieces of Colonial American history.

Each coin available in this offer will come displayed in a beautiful wood presentation case and accompanied by a fact-filled storycard and Certificate of Authenticity. Add one to your collection today. Dates will vary.

Don’t miss your chance to get a coin featuring the namesake of George Washington. Click on to your cart today. It’s the perfect piece to start or add to your collection of early American coins!