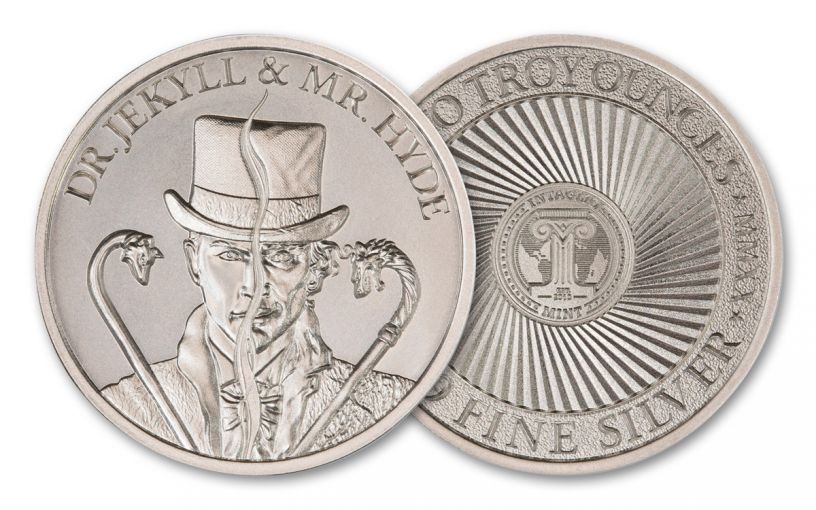 Availability: In Stock
This item will ship within 2 business days.
Item #
364536
Add to Wish List Add to Wish List Wishlist is for registered customers. Please login or create an account to continue. Add to Compare
Recommended Products
Product Description

Scottish author Robert Louis Stevenson is well known for his many adventure novels including Treasure Island, Kidnapped and The Master of Ballantrae. But it is his short novella titled The Strange Case of Dr. Jekyll & Mr. Hyde first published in 1886 that has lived on as a morality tale of how human actions and personalities are determined by good and evil. That debate took an ominous turn in 1888 after the brutal Jack the Ripper killings began haunting London’s foggy gas-lit streets. Many people at the time connected Stevenson’s outwardly respectable Dr Jekyll and the murderous Mr. Hyde with the invisible East End killer.

Now Dr. Jekyll & Mister Hyde are ready to step into your collection with this positively frightful medal struck by the Colorado-based Intaglio Mint that features the kindly visage of Dr. Henry Jekyll split down the middle with his evil alter ego Mister Edward Hyde staring malevolently from the other half. Struck in two Troy ounces of highly pure 99.9% fine silver, it’s a two-headed horror masterpiece that’s perfect for any monster menagerie!

Even people who haven’t read the book or seen the more than 123 film versions of the Victorian-era classic know that having a Jekyll & Hyde personality means having a two-sided personality, one side of which is good and the other evil. That makes this medal the perfect flipping piece — it’s a perfect two-headed round that substitutes “Good” and “Evil” for “Heads” or “Tails.”

Each medal available in this offer will come in original Gem Brilliant Uncirculated (BU) condition with razor-sharp details that are as fresh and crisp as they day the medal left the mint. There’s no need to flip a coin to decide on this offer; add one to your collection today. Or better yet, get TWO so you can see each side of everyone’s personality through the allure of gleaming silver!

Dr. Jekyll & Mister Hyde are back on this frightfully good Two-Ounce Silver Vintage Horror Series Medal from the Intaglio Mint’s Vintage Horror series. Order now; it will make a shocking addition to any collection!