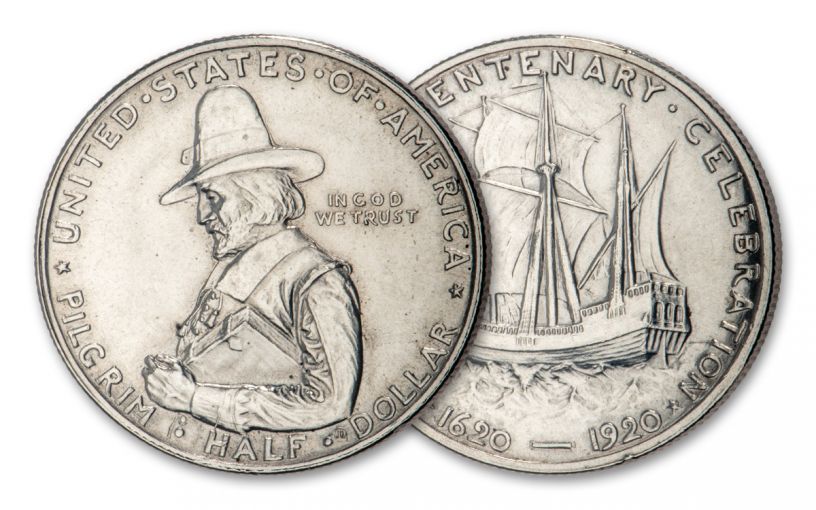 Availability: Available for Order
This item will ship 08/05/21
Item #
183962
Add to Wish List Add to Wish List Wishlist is for registered customers. Please login or create an account to continue. Add to Compare

The Mayflower was headed toward the Dutch territory of New Amsterdam in 1620 when she was blown off course and landed at Plymouth Rock far from the intended destination of Manhattan. Undaunted, the Pilgrims traveling aboard the tiny vessel proceeded to establish their own colony and helped start the tradition of Thanksgiving that we know and love today.

In 1920, to celebrate the 300th Anniversary of the Pilgrims’ arrival in America, the U.S. Mint coined this Pilgrim Tercentenary Commemorative Silver Half Dollar. Minted in 90% silver, this classic commemorative is one of the most beautiful U.S. coins ever produced. On one side the Mayflower is depicted under full sail heading to America. The obverse features Pilgrim governor William Bradford carrying his Bible. Under Bradford's guidance, Plymouth overcame the hardships of the first year. By the autumn of 1621, the Pilgrims had much to be thankful for. After the harvest, Squanto and about 90 Wampanoag Indians – who helped the settlers survive the first harsh winter – joined the Pilgrims for a feast now hailed as the First Thanksgiving.

The 1920 Pilgrim Tercentenary Commemorative Silver Half Dollar has been one America’s most sought-after coins for nearly 100 years. The Philadelphia Mint struck 200,112 half dollars in October of 1920 and they were sold for $1 each with the profits going to the Pilgrim Tercentenary Commission. No date was on these coins. Another 100,000 were minted a year later and those coins all had the 1921 date near the bust of William Bradford on the obverse. After a promising start, sales tailed off, and tens of thousands of coins from each year were returned to the Philadelphia Mint for melting. The Tercentenary Commission returned to the mint 48,000 of the 1920 issue and 80,000 of the 1921 issue.

In the years since, many more have been melted, while others wore down in circulation. But now here’s your chance to get one of the original 1920 coins in About Uncirculated (AU) condition with lots of nice high detail. Click one to your cart today – you’ll give thanks that you did!

Pay tribute to the historic 300th Anniversary of the Pilgrims landing at Plymouth Rock with the 1920 Pilgrim Tercentenary Silver Half Dollar. Click one to your cart today!