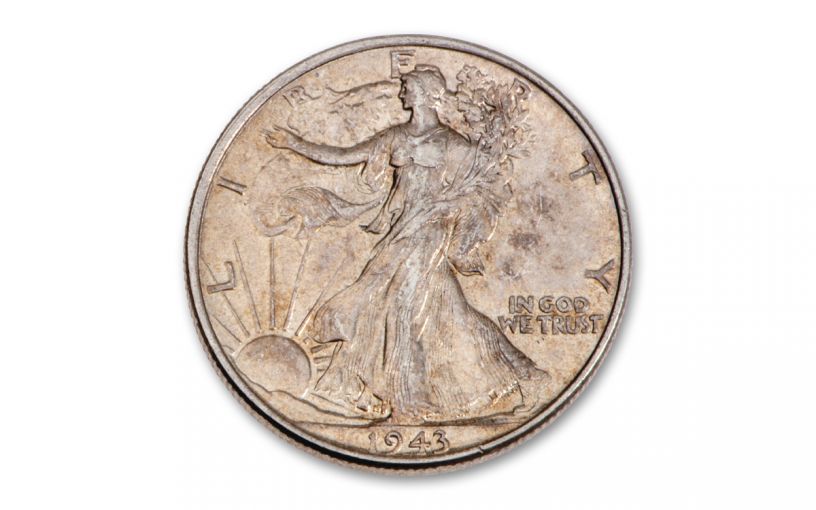 Availability: In Stock
This item will ship within 2 business days.
Item #
226336
Add to Wish List Add to Wish List Wishlist is for registered customers. Please login or create an account to continue. Add to Compare

The Walking Liberty Half Dollar — affectionately known to many collectors as a “Walker” — is surely one of the most beautiful coins ever struck by the U.S. Mint. In fact, the Walking Liberty obverse is so iconic and beloved that it was resurrected in 1986 as the obverse for today’s Silver Eagles!

Designed by Adolph A. Weinman, Lady Liberty is shown striding towards the sun, her right hand open and outstretched as if in invitation. In her left arm is a bouquet of olive branches. The coin’s reverse depicts a stylistic eagle standing on a rock ready to take flight. A mountain pine sapling springs from the rock, symbolizing America. This patriotic design always proved difficult to strike, meaning that finding circulated specimens in nice condition can be difficult. But in this offer, you can secure a World War II-era Walker in nice About Uncirculated (AU) condition. Mint marks will vary.

Walking Liberty Half Dollars were struck in 12.5 grams of 90% silver and were issued from 1916 to 1947. These coins are a staple of American history and are even more popular today than when they circulated during the first half of the 20th Century It’s time to fill the hole in your collection — walk one of these coins into your collection today!

Get a beautiful silver coin stuck that, while it circulated in commerce more than 75 years ago, still retains some of its mint luster with this 1943 Walking Liberty Half Dollar. Reserve one to your cart while they’re still available!