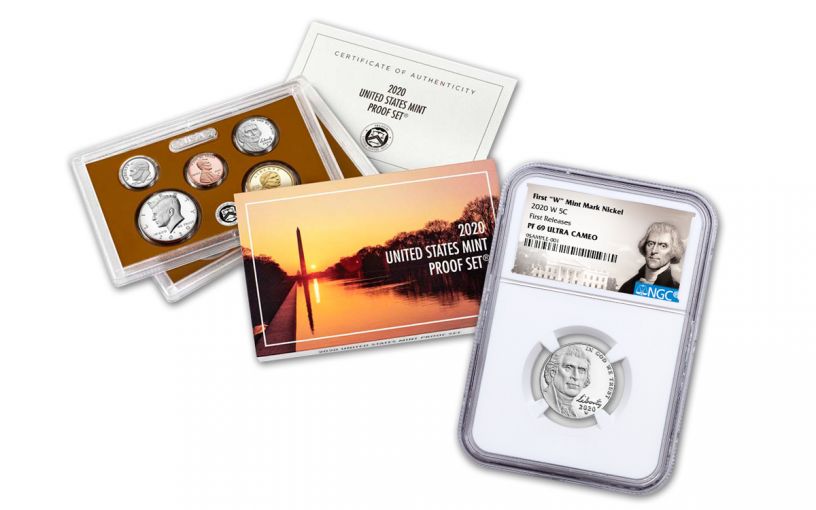 Availability: Available for Order
This item will ship 06/29/20
Item #
359950
Add to Wish List Add to Wish List Wishlist is for registered customers. Please login or create an account to continue. Add to Compare

The First Nickel to Feature the “W” Mint Mark

Thomas Jefferson is one of our nation’s most important Founding Fathers. A spokesperson for democracy, he was the principal author of the Declaration of Independence and served as the third president of the United States. As president he is remembered for making the Louisiana Purchase that doubled the size of the country. Lost in all of Jefferson’s famous accomplishment is one of his first acts as president: the establishment of the United States Military Academy at West Point.

In 2020, the United State Mint’s branch mint at West Point gave Jefferson his due by striking Premium Jefferson Nickel Proof coins, the very first Jefferson Nickels to feature the “W” mint mark! But don’t expect to see these coins marching all over the place – they are available only in the U.S. Mint’s 2020 Proof Sets!

We’ve not only secured some of these highly coveted sets, but we’ve had the 2020-W Jefferson Nickels certified and graded by the Numismatic Guaranty Corporation (NGC), one of the world’s leading independent third-party grading services. What’s more, each 2020-W Jefferson Nickel available in this offer has been graded by NGC as being in near-perfect Proof-69 (PF69) condition, a distinction that means your almost-flawless coin will showcase an impressive full strike and indistinguishable imperfections – well above and beyond the quality of the vast majority of coins in the series! In addition, NGC has also certified that these 2020-W Jefferson Nickels are First Releases (FR) coins, a designation that means they were received by NGC or an NGC-approved depository within the first 30 days of their release.

In this offer you will also receive a 2020-S United States Mint Proof Set consisting of proof versions of the Lincoln Penny, Jefferson Nickel, Roosevelt Dime Kennedy Half Dollar, Native American Dollar and all five one-year only America the Beautiful Quarters from American Samoa, the U.S. Virgin Islands, Connecticut, Vermont and Kansas. All 10 coins were struck at the San Francisco Mint.

Don’t delay – make sure you add the 2020-W Premium Jefferson Nickel Proof to your collection. As the first ever nickel to feature a “W” mint mark, it’s an absolute must-have!

Firsts are always important for any collector – and when it’s a coin like this in high-grade condition it becomes an essential piece that cannot be passed up. Make sure your collection is complete and click it to your cart today!