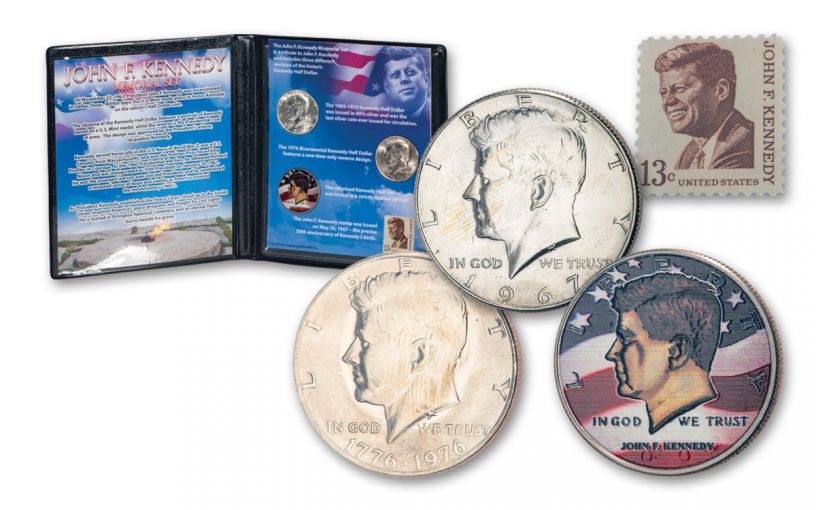 Availability: In Stock
This item will ship within 2 business days.
Item #
351286
Add to Wish List Add to Wish List Wishlist is for registered customers. Please login or create an account to continue. Add to Compare

One of America’s most beloved presidents, John F. Kennedy left a legacy behind that will continue to endure for generations. Whether it was a call for an entire generation to accept responsibility for its government by taking political and social action or his challenge to land a man on the moon by the end of the 1960s, JFK’s vision of political action and public service based on courage, service, inclusion, and innovation survives to this day.

Now you can honor his memory with this outstanding John F. Kennedy Memorial Four-Piece Set that assembles a fitting array of tributes to a man whose short life affected so many.

The set includes three different examples of the Kennedy Half Dollar, first issued the year after President Kennedy was assassinated in 1963. Intended as a one-year-only commemorative to the fallen president, the Kennedy Half Dollar proved to be so popular that has been issued as the nation’s circulating 50-cent piece ever since. Before the folks at the U.S. Mint knew the coin was going to be an instant classic and a hit with the American public, they struck it in 40% fine silver – the last-ever silver coin issued for circulation. Your first coin is one of those same 40% silver Kennedy Half Dollars!

The second coin is a limited-edition regular-issue Kennedy Half Dollar that features JFK specially colored in gold while behind him the coin has been enhanced by the red-white and blue image of an American flag waving in the background. The third coin in the set is the one-year-only 1976 Kennedy Bicentennial Half Dollar featuring Philadelphia’s Independence Hall rather than the regular image of the Presidential Coat of Arms. All three coins come displayed in a special story folder along a fourth piece of the set; a 13-cent commemorative JFK stamp issued on May 29, 1967 – exactly 50 years after Kennedy was born.

The Days of JFK’s “Camelot” may be gone, but the excitement of that short-lived era will never be forgotten – even by generations of Americans who weren’t even alive at the time! This set will make a wonderful addition to any collection or a terrific place to start for any young collector looking to join the hobby!