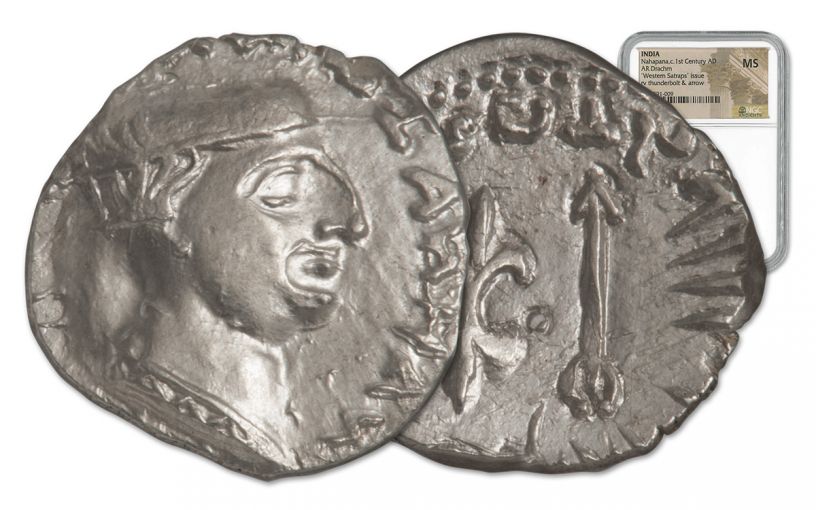 Availability: Out of Stock
This item is currently Out of Stock. Please sign up to be notified if this product becomes available.
Item #
289780
Add to Wish List Add to Wish List Wishlist is for registered customers. Please login or create an account to continue. Add to Compare

An Indo Greek Silver Drachm from the First Century!

About the size of a modern-day quarter, the drachm represented a denomination that originated from ancient Greece. The "coin of the realm" during several centuries BC and beyond, it was brought to India by Alexander the Great's conquering armies. Because it was so useful in trade, the currency was adopted there, as it was in much of the developed world.

So, it's only natural that the drachm was the currency of choice for the realm of King Nahapana. Located in what is now Western India, Nahapana's kingdom was a major trading hub of luxury items between the Far East and Rome. Of course, all this trade meant that Drachms would also need to be struck by Nahapana's mint in the same currency.

That's why this Silver Drachm, a Greek denomination coin, was struck by the realm of King Nahapana in what is now India between 53 and 99 AD! Displaying a portrait of the king on the obverse and a thunderbolt and arrow on the reverse, this Silver Drachm is graded Mint State (MS) by Numismatic Guaranty Corporation (NGC) -- a very high grade for a coin of this age.

It's a coin with a provenance that is a virtual numismatic history of the ancient world. Add this historic Indo Greek Silver drachm to your collection today!