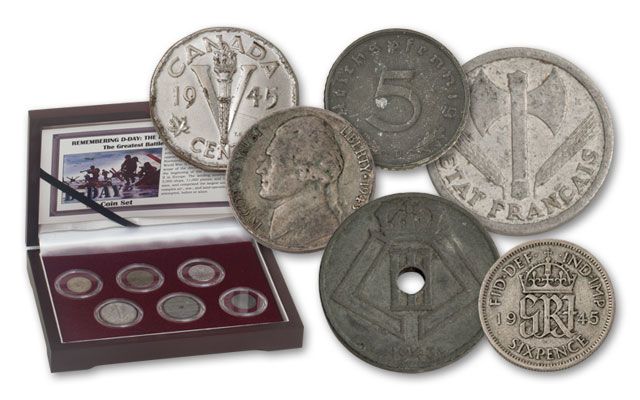 Availability: Out of Stock
This item is currently Out of Stock. Please sign up to be notified if this product becomes available.
Item #
260999
Add to Wish List Add to Wish List Wishlist is for registered customers. Please login or create an account to continue. Add to Compare

From North America to Europe, June 6th, 1944 marked a moment in time that was destined to change the conflict that had been raging since 1939. D-Day, the invasion of France by allied forces. This six-coin collection features some of the most popular coin designs circulating in the warring nations on that day: A British Sixpence, a U.S. Nickel, Canadian Nickel, a French 2 Franc, Belgian 25 Centimes and a German 5 Reichspfenning, all date between 1937 and 1944. Each is in circulated condition, and your set comes in a luxurious display case with a story card about the D-Day invasion. A great World War II memento collection. Dates vary.