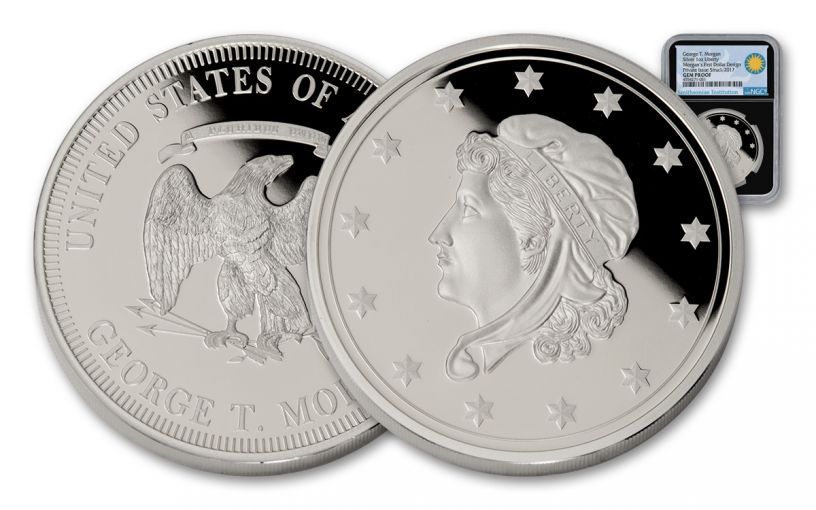 Availability: In Stock
This item will ship within 2 business days.
Item #
310252
Review this product
Add to Wish List Add to Wish List Wishlist is for registered customers. Please login or create an account to continue. Add to Compare
Complete your collection with one of these:
Related Articles
Product Description

Each of Morgan’s First Dollars is officially authorized by the Smithsonian, displaying Morgan’s design exactly as he originally intended. Each proof, struck in a full ounce of 99.9% fine silver, features Lady Liberty surrounded by 13 stars, representing the founding states. She notably wears a "mob cap," a cloth bonnet that became popular among the French working class in the 1800s, and so was often seen in great numbers during the marches and public demonstrations of the French Revolution. By having Lady Liberty don the mob cap, Morgan was making a bold statement: Liberty represented the ideals of every American -- not just the wealthy.

With a release of such historical importance, there’s no telling how long our supply will last. That’s why you need to secure your own selection of Morgan’s First Dollars NOW. Each proof is professionally certified as Gem Proof condition by Numismatic Guaranty Corporation (NGC) and comes sealed in a protective acrylic holder to guard its provenance forever. Don’t let numismatic history pass you by -- secure yours now!