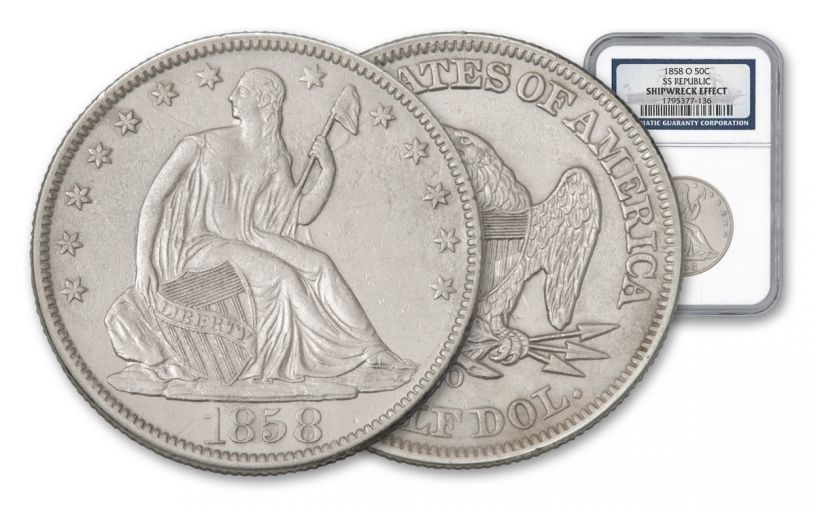 Availability: Out of Stock
This item is currently Out of Stock. Please sign up to be notified if this product becomes available.
Item #
333929
Add to Wish List Add to Wish List Wishlist is for registered customers. Please login or create an account to continue. Add to Compare
Recommended Products
Product Description

The SS Republic’s last voyage began on October 18, 1865. She departed New York bound for New Orleans with a reported $400,000 in gold and silver coins. On October 23, the sidewheel steamship found itself off the coast of Georgia when it was caught in hurricane that blew in from the east. By evening the ship’s hull was leaking so badly that the fire in her boiler was extinguished and the ship had helplessly stalled. After two days of valiant struggle to keep the vessel afloat, the SS Republic went down just as the passengers and crew escaped into lifeboats and a makeshift raft.

Fast forward to the year 2003 and a report crackled over a wireless radio in the offices at Odyssey Marine Exploration: The SS Republic had been found – its treasure protected over the years in approximately 1,700 feet of icy Atlantic water! The news culminated a 12-year search by the Tampa, Florida-based commercial archeological company. Recovery efforts began on the sunken remains of the SS Republic, a find containing thousands of gold and silver coins estimated at being worth today as much as $180 million.

Now you can add recovered treasure from the wreck to your collection! Here’s your chance to secure spectacular 1858-O Seated Liberty Half Dollar struck at the New Orleans Mint and certified by the Numismatic Guaranty Corporation (NGC) as an official “Shipwreck Effect” coin from the wreck of the SS Republic. This coin was struck in just a few years before the first shots of the Civil War were fired and then lost in the violent shipwreck – until now! Your coin will also come with a 276-page book, “Lost Gold of the Republic,” which tells the story of the your newly claimed sunken treasure.

When was the last time you added a real piece of American sunken treasure to your collection – one that spent nearly 160 years underwater? Don’t miss out; put this spectacular coin in your cart today!