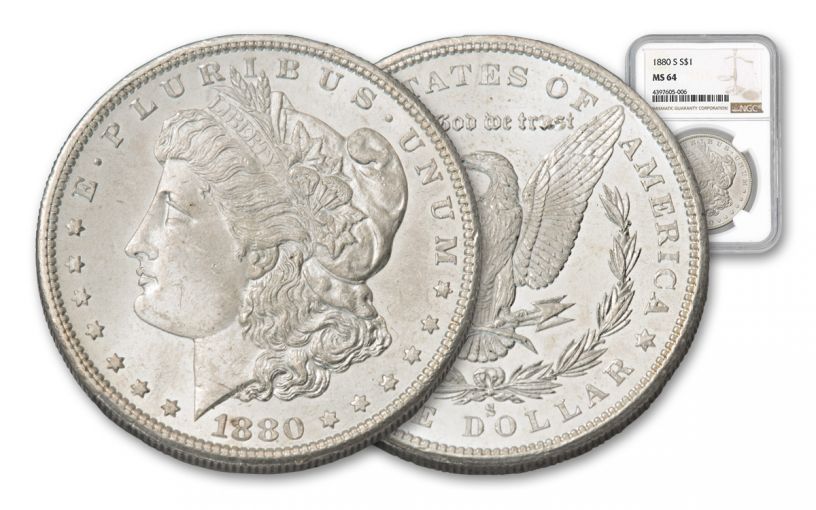 Availability: In Stock
This item will ship within 2 business days.
Item #
350917
Add to Wish List Add to Wish List Wishlist is for registered customers. Please login or create an account to continue. Add to Compare

The Morgan Silver Dollar is perhaps the most widely collected U.S. vintage silver dollar ever struck. Its Wild West history, large size and bold designs make it a favorite of many collectors. And if you ask them which are the most beautiful, they’ll likely point you to those that bear the “S” mint mark of the San Francisco Mint, known for their high-quality strikes. In fact, the first five Morgans struck in San Francisco are argued by many numismatists as the best-struck Morgans of the entire series

When the very first Morgan Silver Dollars were released from the San Francisco Mint, folks were shocked at the stunning quality of the coins. Because silver dollars are so big and difficult to strike, the details in the middle of the coins are often lacking. But they were almost always sharp on Morgans from the San Francisco Mint. These 1880-S Morgans are among the highest quality Morgans struck anywhere and in any year. Each of these big 90% silver coins has been graded by either the Numismatic Guaranty Corporation (NGC) or the Professional Coin Grading Service (PCGS) to be in Choice Uncirculated Mint State-64 (MS64) condition. Grading service varies.

This piece is a real prize! – it’s a magnificent coin in a beautiful grade at a fantastic price! It’s the perfect place to start your Morgan Silver Dollar collection!

Here’s your chance to secure a key-date Morgan – the 1880-S Morgan Silver Dollar in Choice Uncirculated condition! Don’t delay; add it to your cart today!