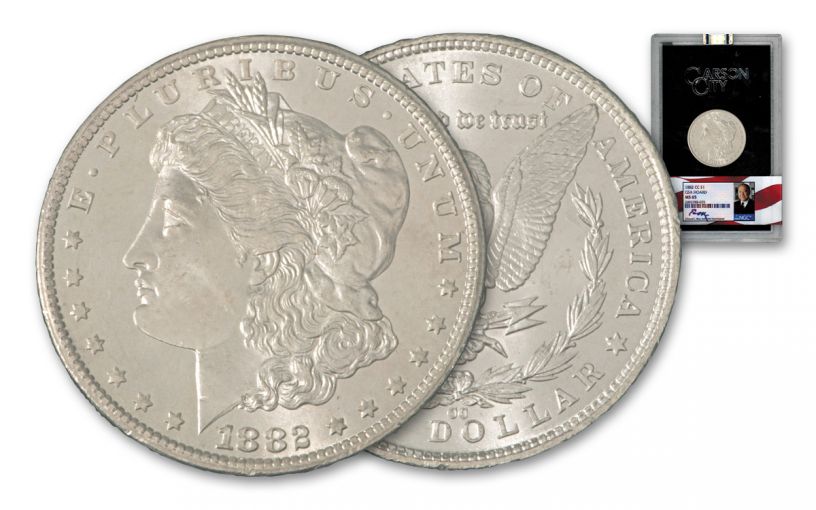 Availability: Out of Stock
This item is currently Out of Stock. Please sign up to be notified if this product becomes available.
Item #
353136
Add to Wish List Add to Wish List Wishlist is for registered customers. Please login or create an account to continue. Add to Compare

While millions of Morgans were struck during the coin’s 28-year history, some of the most coveted are the CC Morgans. That’s because the Carson City Mint struck the Morgan Silver Dollar for just 13 years from 1878-1885 and again from 1889-1893. In total, the fabled Carson City Mint was the creator of just 2% of all Morgans ever struck!

Unfortunately for today’s collectors, million of Morgans were melted thanks to the Pittman Act of 1918. A generation later, the Silver Act of 1942 melted more Morgans. Many more fell victim to the melting pots in the early 1980s when the price of silver shot up to $50 an ounce. So, while millions of Morgans were struck from 1878 through 1921, massive silver meltings and the ravages of time have taken their toll. Today coin experts believe that only 15% of all Morgans ever struck remain in existence. And when you consider that only about 2% of the entire Morgan Dollar mintage was struck at the Carson City Mint, it’s a wonder any CC Morgans exist today!

Now you can add one of these historic Morgans to your personal collection with this Carson City Morgan struck in 1882. Not only will your Morgan Silver Dollar come sonically sealed in its original GSA holder, but it will be graded by the Numismatic Guaranty Corporation (NGC) as being in Choice Mint State-64 (MS64) Uncirculated condition. That grade and authentication will be displayed on a special NGC stars-and-stripes wrap affixed to the holder. To top it off, the special NGC wrap includes another phenomenal feature – the signature of Edmund Moy, the 38th Director of the U.S. Mint!

In addition to your three-coin set, you’ll also receive a certified section of an actual Carson City Morgan bag, an authentic Comstock-area railroad spike, two storybooks on the Carson City Mint and the GSA hoard, and a reprint of a 1970s GSA brochure used for the historic sale in the 1970s.

This is your opportunity to get not one of the most famous coins of the Wild West certified, graded and encapsulated in high-grade condition. Fall in love with the romance of the Old West and add this magnificent 1882-CC Morgan Silver Dollar to your collection today!

Don’t miss your chance to get one of these 1882-CC Morgans in its original GSA holder and signed by former U.S. Mint Director Edmund Moy. Quantities are extremely limited so click it to your cart right now!