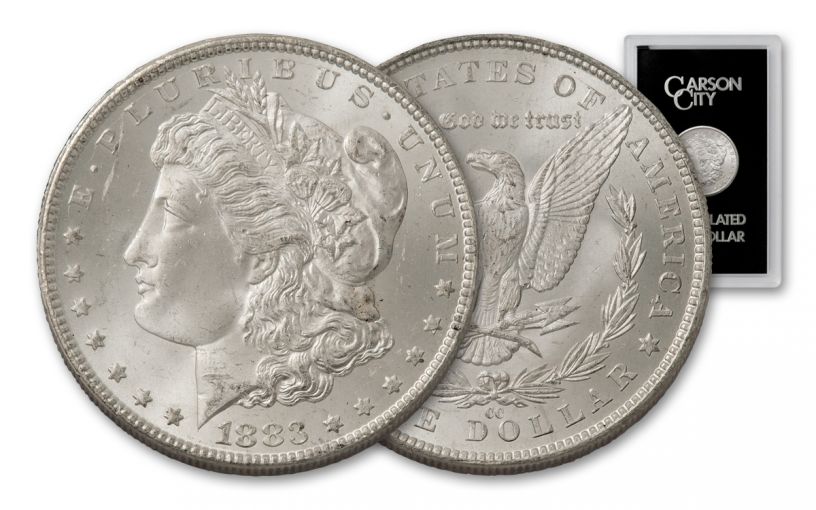 Availability: Out of Stock
This item is currently Out of Stock. Please sign up to be notified if this product becomes available.
Item #
184079
Add to Wish List Add to Wish List Wishlist is for registered customers. Please login or create an account to continue. Add to Compare

In 1962, the United States Treasury found a mother lode of mint-fresh bags of Morgan Silver Dollars from the fabled Carson City Mint. In order to make these spectacular Carson City Morgans available to all Americans, the General Services Administration (GSA) held a series of sales between 1972 and 1980.

Each coin struck from Comstock Lode silver was sealed into a large black GSA holder. Today, many collectors believe these holders were the inspiration for today’s “slab.” Over the years, most of these GSA CC Morgans have been removed from their original holders. After a great effort, we’ve located a small number of GSA Carson City Morgans, including this 1883-CC Morgan in Uncirculated condition.

Don’t miss your chance to own this historic Silver Dollar “Time Capsule.”

The Carson City Mint was closest to the source of the silver being used to strike Morgans: The Comstock Lode in Nevada. The quality of the coins struck there are usually the best of all. "CC" Morgans feature crisp strikes and frosty surfaces and are among the most desirable of all Morgans. And those in GSA holders like these beauties are among the most unique in the entire history of Morgan Silver Dollars!