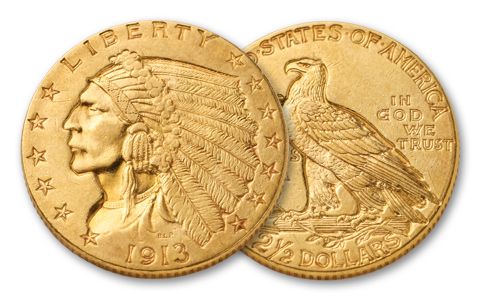 Availability: In Stock
This item will ship within 2 business days.
Item #
222095
CC Payments as low as
$198.33 / month
Add to Wish List Add to Wish List Wishlist is for registered customers. Please login or create an account to continue. Add to Compare
Recommended Products
Product Description

One of the shortest-lived series in U.S. coin history, the 1908-1929 “Gold Indian” $2.50 coins are collector favorites today. People love the magnificent portrait of an authentic-looking Native American on the obverse and the proud Bald Eagle on the coin’s reverse. But what really sets these coins apart is their recessed or incused design – which was basically a reverse of the normal die in that the design was pressed into the coin rather than the typical coin where the design rises outward from the coin. Designed by Boston sculptor Bela Lyon Pratt, the $2.50 Gold Indian is joined by the $5 Gold Indian struck during the same period as the only U.S. coins ever issued with incuse deigns, making them two of the most intriguing American coins ever issued!

Now you can secure one of these historic $2.50 Gold Indians for your collection – and in Brilliant Uncirculated (BU) condition! Though tough to find today, we have amassed our own spectacular hoard of fabulous $2.50 Gold Indians. Classic American gold is yours! Dates vary.

When the new $2.50 Gold Indians were released in 1908, folks gasped. The design was sunk into the surface of the coin rather than raising it above. And what a design! Secure yours now in Brilliant Uncirculated condition. Dates vary.