Should I Buy Circulated or Uncirculated Coins?

In the world of coin collecting, there are only two types of coins, circulated and uncirculated. 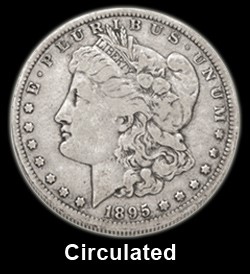 The difference between the two types of coins can usually be easily identified, and the value difference can often be considerable. Every coin starts its life as uncirculated when it is struck at the mint, and it remains in uncirculated condition until it enters the commerce stream or is otherwise damaged.

In order to be certified as uncirculated, like these uncirculated U.S coins, a coin must not exhibit any trace of having been in circulation. There are two major factors that indicate a coin is in uncirculated condition:

Contrary to popular belief, an uncirculated coin is not always in pristine condition. It can, in fact, exhibit “contact marks,” which are small dings and even scratches that can be picked up from contact with other coins at the mint and in bags as the coins are transported from the mint. Take for example Morgan Silver Dollars, some of which are considered uncirculated, even though they bear marks from being jostled in bank bags. Experts can tell the difference between contact marks and wear from circulation. 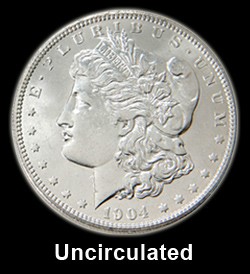 Uncirculated coins are graded between MS60 and MS70. A coin in perfect MS70 condition will not have any contact marks or other blemishes, while a coin in MS60 condition may show contact marks and may be missing much of its luster.

Proof coins, like Proof American Silver Eagles for example, are not intended to be introduced into circulation but are made only for the collector market. While regular coins are struck just once under normal pressure and at a high rate of speed, each Proof coin is carefully struck at least twice under high pressure to bring out the full details of the design. The background of a Proof coin is usually mirror-like and considered to be the “best of the best.” Unless they are mishandled or placed into circulation, Proof coins will be uncirculated and are graded only between PF60 and PF70. The same standards exist for determining their grade as for regular uncirculated coins.