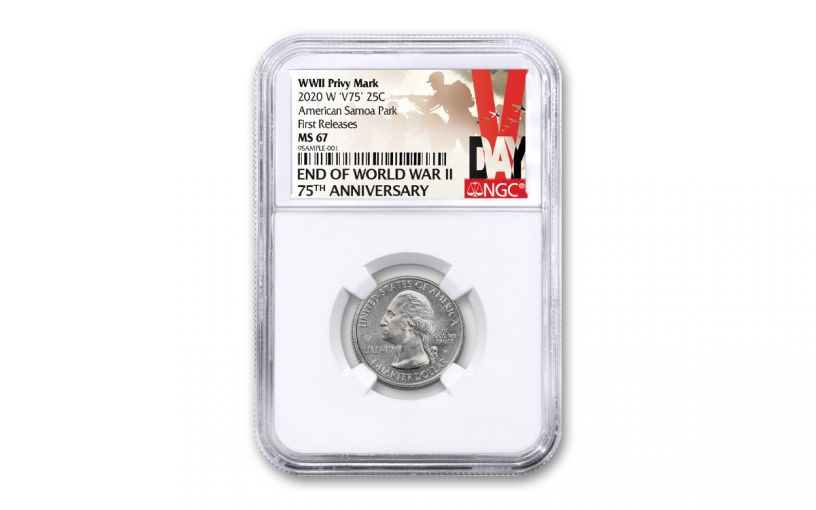 Availability: In Stock
This item will ship within 2 business days.
Item #
362906
CC Payments as low as
$137.50 / month
Add to Wish List Add to Wish List Wishlist is for registered customers. Please login or create an account to continue. Add to Compare

The America the Beautiful series has proven extremely popular since it began back in 2010. For those who have been collecting from the start, each release has provided a new and exciting way to discover and appreciate all that America has to offer. For some, that means searching through pocket change for each new release. This may be a fun piece of nostalgia, but it also means acquiring a coin that’s nicked up and otherwise damaged through circulation. Now you don’t have to sift through the candy wrappers and paper clips in your pocket to find this year’s quarters — we’ve done all the work for you!

We’ve managed to rescue a small hoard of the first ATB coin of 2020, the National Park of American Samoa Quarter meant for circulation and had them certified and graded by the Numismatic Guaranty Corporation (NGC), one of the world’s leading third-party grading services! And here’s the good news: Each coin available in this offer has been graded by NGC in stunning Superb Gem Uncirculated Mint State-67 (MS67) condition! Plus, NGC has certified these quarters to be First Releases (FR) coins, a designation that means they were received by NGC or an NGC-approved depository within the first 30 days of its release.

ABOUT THE NATIONAL PARK OF AMERICAN SAMOA QUARTER: Located in the South Pacific Ocean more than 2,500 miles southwest of Hawaii lies American Samoa, a U.S. territory that consists of seven islands and atolls. There, you’ll find the National Park of American Samoa, a lush tropical paradise spread across 13,500 acres — 4,000 of which are underwater — that preserves and protects coral reefs, rainforests and fruit bats. In fact, the National Park of American Samoa is the only park in the United States that is home to the Samoan fruit bat.

This privy marked National Park of American Samoa Quarter is one of five America the Beautiful Coins that will be issued in 2020 meaning it will be available only for so long. The grade and luster of coins like these will only decline further while they remain in general circulation. Add one to your collection now before it’s too late!

UNIQUE FIRST-EVER PRIVY MARK – The U.S. Mint released a limited mintage of 2020 quarters struck at the West Point Mint directly into circulation that feature a “V75” privy mark to commemorate the 75th anniversary of the end of World War II. This is first time the mint has ever struck quarters with a special privy mark.

GRADED IN STUNNING UNCIRCULATED CONDITION – Your coin has been graded by the Numismatic Guaranty Corporation (NGC) as being in stunning Superb Gem Uncirculated Mint State-67 (MS67) condition.

KEY FIRST RELEASES CERTIFICATION – NGC has certified that your America the Beautiful Quarter is a First Releases (FR) coin. It will come sealed in an acrylic holder with an exclusive World War II 75th Anniversary Victory Day label.