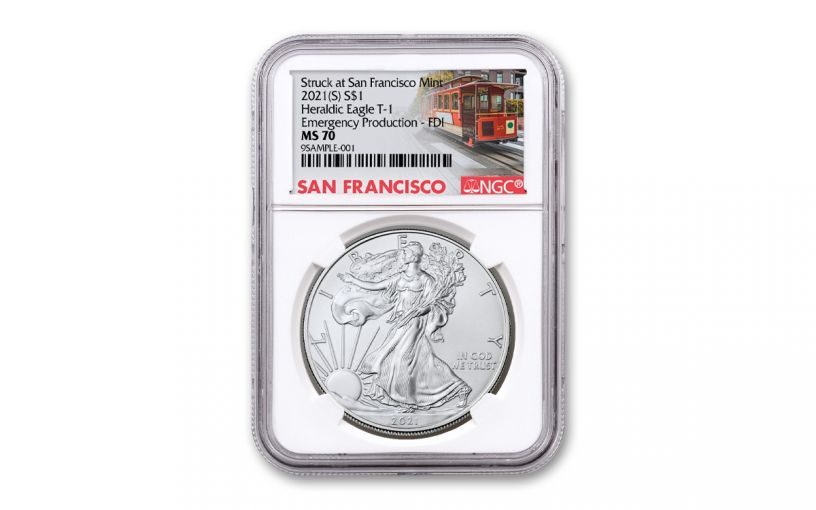 The COVID-19 pandemic that shut down the West Point Mint in 2020 from April 8-20 is having a domino effect that is stretching into 2021. With the first Silver Eagles struck for 2021 being the final year of Mercanti’s original Heraldic Eagle reverse, collector demand is expected to be extremely high. And due, to continued production slow-downs for bullion Silver Eagles brought on by the Covid-19 pandemic, the San Francisco Mint was again tasked with helping keep supplies on hand for the US Mint bullion distributors.

The San Francisco Mint to the Rescue

In most years, the West Point Mint is the U.S. Branch Mint that strikes American Silver Eagle bullion coins. But due to the unique circumstances presented by the perfect storm of eager silver buyers, a last-ever release of John Mercanti’s popular and iconic “Heraldic Eagle” design that appears on the coin’s revers, and a worldwide pandemic, getting the 2021’s first run of Silver Eagle bullion coins to leave the nest has been anything but routine. Thankfully, the San Francisco Mint has once again stepped up to the plate and delivered. And, in this offer, you can secure one — or several — of these 2021-dated American Silver Eagle bullion coins specially struck at the San Francisco Mint.

Since bullion Silver Eagles are struck without mintmarks, however, there’s no way collectors can know if their Silver Eagle is one of these “Emergency Production” releases. But thanks to our status within the coin world, we can! As an authorized re-seller of American Silver Eagles, we’ve been able to secure “monster boxes” that differentiate whether the coins were struck at the San Francisco Mint or the West Point Mint. Then, we sent the coins to the Numismatic Guaranty Corporation (NGC), where they we certified, graded and pedigreed as being “Struck at San Francisco Mint” and “Emergency Production” issues. Plus, these coins were given a Type-1 pedigree to note that they bear the original Mercanti Heraldic Eagle Reverse design.

In addition, every bullion Silver Eagle available in this offer has been graded by NGC as being in flawless Mint State-70 (MS70) condition, a distinction that means these perfectly-graded coins have ZERO imperfections — showing all features and fields exactly as the engraver and mint intended. Plus, NGC has certified that these Silver Eagles are First Day of Issue (FDI) coins, a designation that means they were received by NGC or an NGC-approved depository by the release date or on the business day within 24 hours of the official release date. Collectors seek out these coins because they are produced with new dies and considered to have sharper strikes and deeper mirrors than those that are struck later. Also, the population of coins labeled First Day of Issue is only a fraction of the total mintage. Each will also come sonically sealed in an acrylic holder with an exclusive San Francisco Trolley label.

Although the U.S. Mint has not yet confirmed the mintage for these 2020(S) Struck at San Francisco pedigree Silver Eagles, it is miniscule compared to the bullion American Silver Eagles that are struck annually by the West Point Mint. This 2020(S) Silver Eagle Struck At San Francisco Emergency Production coin will be a key collectible within any Silver Eagle collection. Order yours today and make sure it’s part of yours!

Don’t miss your chance to get a limited-edition Emergency Production Silver Eagle Struck at the San Francisco Mint. It’s a one-of-a-kind opportunity to secure a low-mintage, key-date Silver Eagle from a historic moment in time.