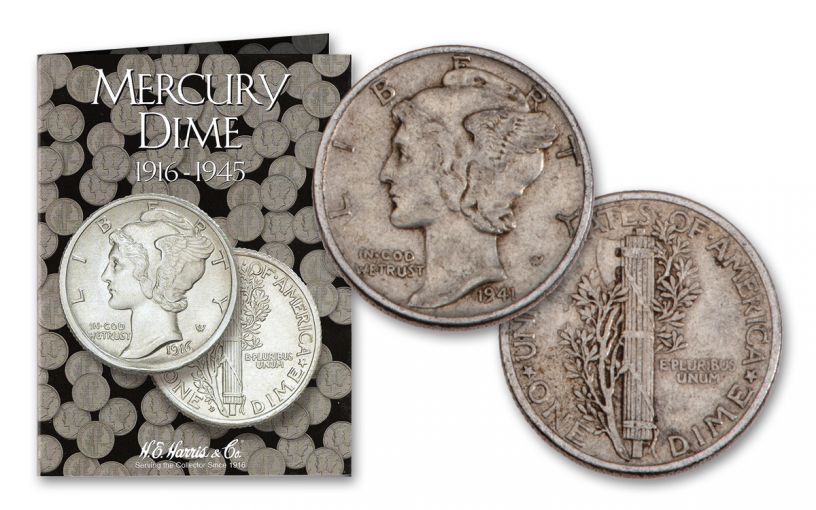 Availability: In Stock
This item will ship within 2 business days.
Item #
367282
Add to Wish List Add to Wish List Wishlist is for registered customers. Please login or create an account to continue. Add to Compare

One of the most classic designs in U.S. coin history is the Mercury Dime, so named for Liberty’s resemblance to the mythical god of commerce. Designed by Adolph A. Weinman on the precipice of World War I, the coin’s design was said to represent “Freedom of Thought” — a freedom that emboldened us as we fought against the Axis Powers in World War II.

The Last of the Mercury Dimes

This 15-coin set brings together every mint mark of Mercury Dime struck between 1941 and 1945, including coins from the Philadelphia, Denver and San Francisco Mints. Each coin comes in Fine or better condition, with the entire set housed together in a Mercury Dime Album with a spot for each coin. What’s more, it also features the last Mercury Dimes ever issued as the series came to an end when it was replaced by the Roosevelt Dime in 1946.

One of America’s Most Beloved Coins

In the century since it was first issued, the Mercury Dime has gone on to become one of America’s most beloved coins. In addition to its iconic design of Lady Liberty with a winged Phrygian cap that makes her look like the Roman god Mercury, the coin’s reverse depicts a fasces symbolizing unity and strength, and an olive branch, signifying peace. Designed by famed German-born American sculptor Adolph A. Weinman, the image was so popular that when the U.S. Mint struck its first Palladium Eagle coin in 2017 it selected Weinman’s design!

Don’t miss out; secure one of these 1941–1945-PDS Mercury Dime 15-Piece Sets for your collection right now!