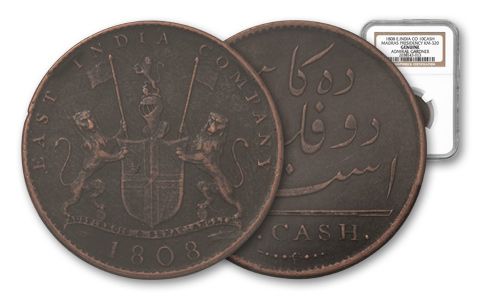 Availability: Out of Stock
This item is currently Out of Stock. Please sign up to be notified if this product becomes available.
Item #
251171
Add to Wish List Add to Wish List Wishlist is for registered customers. Please login or create an account to continue. Add to Compare

In January of 1809 the Admiral Gardiner, a ship of the East India Company, left port headed for India. Her cargo: 48 tons of newly minted 1808 10 Cash copper coins destined to pay the company’s Indian work force. Not only did she never make it to India, she never even made it out of England’s waters. She went down in a storm off the English coast. Almost two centuries later, East India copper coins began showing up in the sands off the English coast. Divers then found the ship and began salvaging her precious cargo. But the seas were so dangerous; the cargo was only accessible for two hours every day! These coins of myth and legend are now available in a limited quantity for you to add to your collection. Each shows the arms of the fabled East India Company and is authenticated and encapsulated by Numismatic Guaranty Corporation (NGC). A great piece of history at a reasonable price.