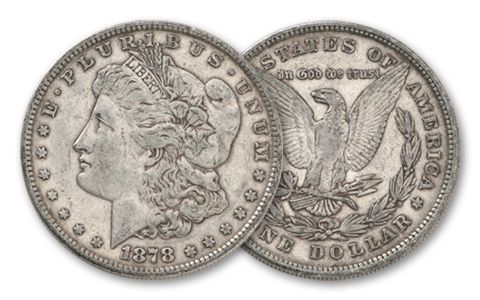 Availability: In Stock
This item will ship within 2 business days.
Item #
228763
Review this product
Add to Wish List Add to Wish List Wishlist is for registered customers. Please login or create an account to continue. Add to Compare
Complete your collection with one of these:
Related Articles
Product Description

This first-year 1878 Morgan from the Philadelphia Mint is among the most coveted Morgans of them all! Not only is it the first year, it’s also the first type, the coin with an eight tail feather eagle. When the coin was released, "eagle-eyed" observers pointed out that eagles always have an odd number of tail feathers, so the mint quickly changed to seven feathers. Collectors love first coins like this. Don’t wait to secure yours. Our small supply will sell out quickly. Order yours now!