Nearly everybody with even a passing interest in Silver Dollars has come across a reference to the Pittman Act of 1918. But, beyond the dry, historical reference to a bill passed over ninety years ago lurks something huge. Something that forever changed the face of coin collecting. Something that, to this very day, impacts each and every Morgan Silver Dollar that has survived. In 1918, Great Britain had a silver problem on its hands. They were in the midst of World War I and needed silver bullion to back millions of British banknotes, particularly in India, where German forces had incited Indian citizens to cash in their notes for actual silver. Back in Washington, Democratic senator Key Pittman of Nevada stepped forward with a proposal. His bill, called the Pittman Act, was passed on April 22, 1918, and it authorized the melting of up to 350 million silver dollars - which would then be sold to Britain for one dollar per ounce of bullion. A total of 270,232, 722 silver dollars were eventually melted under the Pittman Act - nearly half of the entire Morgan Silver Dollar mintage struck up to that time.

Luckily, another provision of the Act authorized the later minting a replacement dollar for every one melted. This process began in 1921, after the War ended. Because no new silver dollar coin design was approved yet, the Morgan Dollar made one final appearance in 1921, but was replaced by the Peace Dollar in December of that year. While millions of Morgans were struck in 1921 to replace their melted counterparts, the fact remains that over 270 million dates, mintmarks, and varieties from 1878 to 1904 were lost forever to the melting pots in 1918.

It truly boggles the mind to try and comprehend the reality of this literal sea of silver. But, to help visualize what was lost in 1918, allow me to paint a few mental pictures: 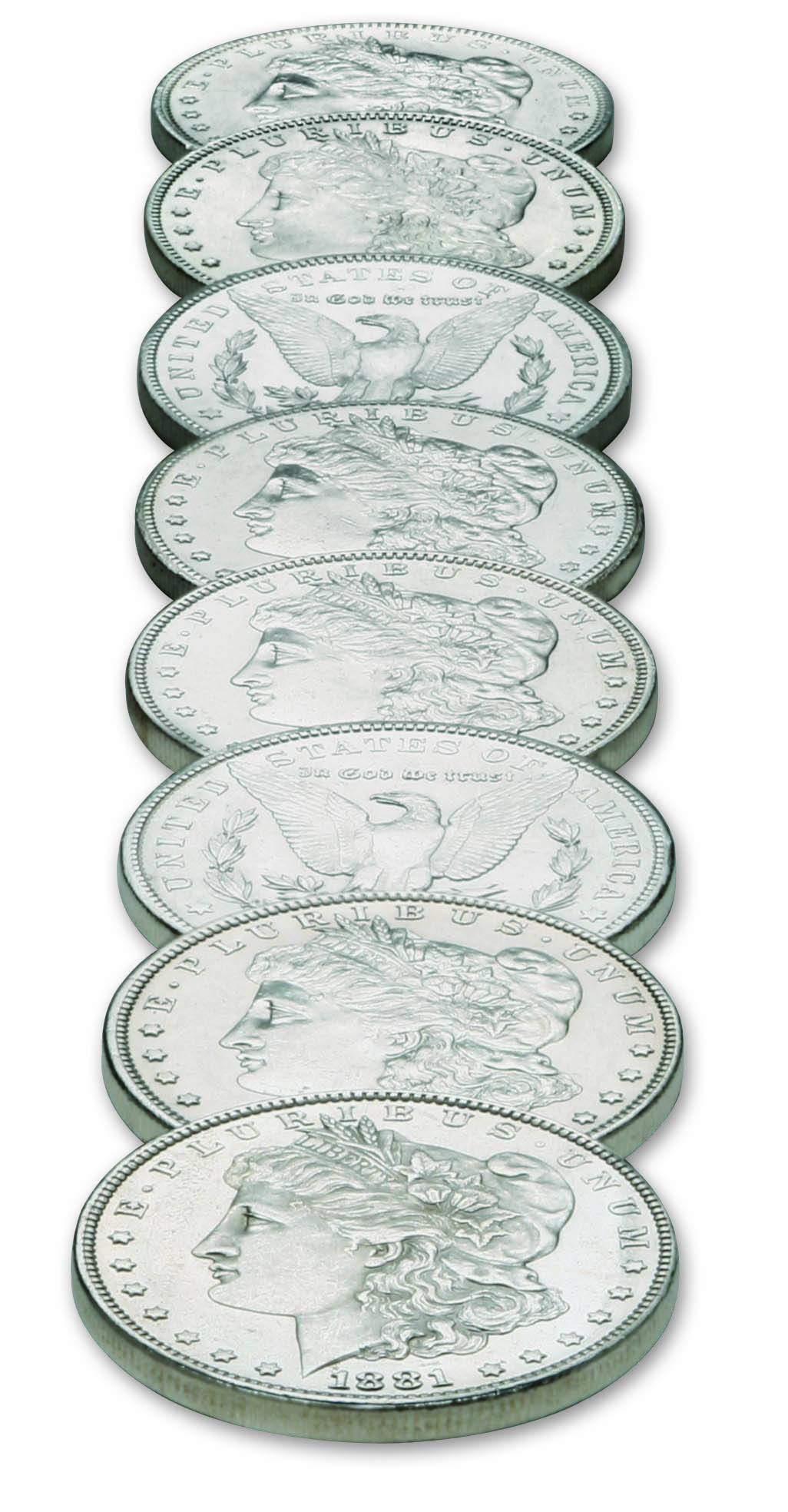 The Pittman Act and Great Silver Dollar Meltdown of 1918

The Pittman Act melt produced over 67,558 cubic feet of silver bullion. Since an Olympic-sized swimming pool holds 88, 263 cubic feet, the lost silver dollars would fill up over three-quarters of an Olympic swimming pool1!

A Skyscraper of Silver
The Empire State Building is 1,463 feet tall. The melted silver dollars could be stacked from the street to the very top of the Empire State to form 1,463 individual stacks. Talk about a massive wall of silver!

Gridiron Gems
If silver dollars were laid out to cover a regulation football field, it would take 3,072,000 dollars to make one layer covering the field from end zone to end zone. This means that all the melted Pittman Act silver dollars could completely cover a football field over 87 layers deep3!

Walk from NYC to LA on a Carpet of Silver Dollars
If all the melted silver dollars were laid end-to-end to form a chain, it would stretch from New York City to Los Angles over 2.5 times4.

Protecting our Nation's Border
If the whole cross-country, "Route 66" approach isn't your thing, how about this: That same silver dollar chain, stretching 6,398 miles, could be laid along the borders of the entire USA and would encircle 84% of the entire country5!

As staggering as these visualizations are, the tragic reality is that many more government and private silver dollar meltings have occurred in the ninety four years since 1918. Millions more were melted during the great run-up in silver prices during the 1980's, and further private meltings continue to this very day. While it is impossible to confirm the exact number of vintage silver that have survived, the renowned coin expert and author, Q. David Bowers has estimated that only 15% or less of all the U.S. silver dollars ever minted have survived to this day6.