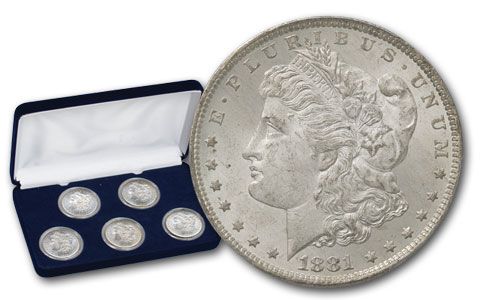 Availability: In Stock
This item will ship within 2 business days.
Item #
228801
CC Payments as low as
$247.50 / month
Add to Wish List Add to Wish List Wishlist is for registered customers. Please login or create an account to continue. Add to Compare

Five Years in the "Big Easy"

The New Orleans Mint was established in the 1830s to meet the growing demand for coins as the country expanded. It has a storied history, having been under the control of three different governments in 1861: the United States, the Republic of Louisiana, and the Confederate States of America. After the Civil War, it continued to strike a limited number of coins until the South recovered. By the 1880s, it was enlisted to strike the new Morgan Silver Dollars, minted from Comstock Lode silver. The first five years of the 1880 decade were the “glory years” for Morgan Silver Dollars, and the mint struck large quantities of the big Silver Dollar. Over the years, they’ve just gotten harder and harder to find. Today, assembling a complete five-year set from 1881 through 1885 can be incredibly difficult. Through a continued effort, we’ve assembled a number of these sets and you can add them to your collection today. Order yours in Brilliant Uncirculated (BU) condition. These “Cartwheel” Silver Dollars represent an American silver legacy that is rapidly disappearing. Secure your Silver Dollar legacy from the “Big Easy” today! You’ll also receive the Morgan Dollar Book by Miles Standish as a bonus with your order.