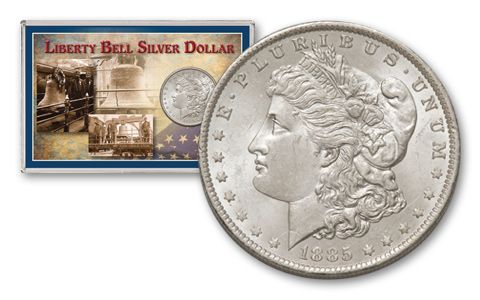 Availability: In Stock
This item will ship within 2 business days.
Item #
227715
Add to Wish List Add to Wish List Wishlist is for registered customers. Please login or create an account to continue. Add to Compare

Liberty Visits the Big Easy for the First Time

For the first time ever, in 1885, the Liberty Bell left Philadelphia and traveled into the Deep South. It was sent to New Orleans to be displayed at the Cotton Exposition, to help foster healing between the North and the South after the Civil War. The train carrying the bell was met by Jefferson Davis, the only president of the Confederate States of America. Many of the attendees at the ceremony saved brand-spanking-new Silver Dollars just struck at the New Orleans Mint. These 1885-O Morgans in Brilliant Uncirculated (BU) condition are just like the coins they saved! Here's your chance to share in this great North/South American legacy. Each 90% silver Morgan comes in a holder featuring the Liberty Bell in New Orleans in 1885. A great collectible, a memento of the legacy of the War Between the States, and an historic gift.