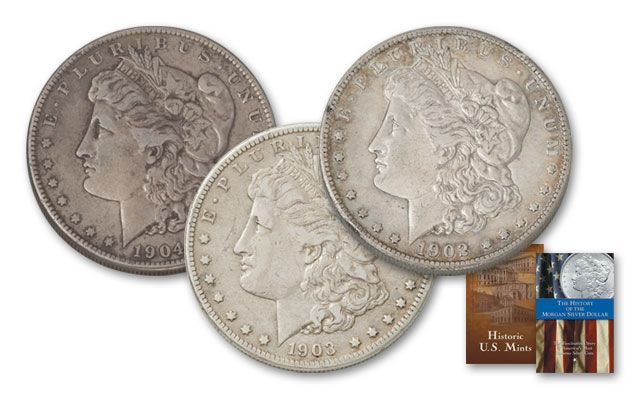 Availability: In Stock
This item will ship within 2 business days.
Item #
288704
CC Payments as low as
$114.50 / month
Add to Wish List Add to Wish List Wishlist is for registered customers. Please login or create an account to continue. Add to Compare

During President Theodore Roosevelt's first term in office, Californians watched Michigan defeat Stanford in the first-ever 1902 Rose Bowl game. A year later, Americans across the country were amazed with news of Orville and Wilbur Wright's first successful airplane flight. And, in 1904, the first Summer Olympic Games ever to be held in U.S. took place in St. Louis, Missouri.

Now you have the opportunity to secure a complete set of vintage Morgan Silver Dollars from all three of these historic years. They are all minted in 90% pure "American" silver mined from Nevada's legendary Comstock Lode. Each three-coin collection includes a 1902, 1903 and 1904 Morgan struck at the "Mother Mint" in Philadelphia- each still in Extremely Fine (XF) condition more than a century since they rolled off the presses!

The most famous and collectible U.S. silver coins of all time, Morgans continue to be coveted by collectors the world over. But today, tracking down high-quality issues of these iconic American coins can be a challenge. Massive quantities were produced between 1878 and 1921, but today, it's estimated that as few as 15% of all Morgans have survived into the 21st Century - since whenever silver prices soared, these hefty precious metal coins were melted down in the millions. So don't wait; add this set to your collection before they're gone forever!

The Morgan Silver Dollar is the quintessential American Silver. Here’s your chance to start or add to your Morgan collection by clicking THREE of these historic coins to your cart today!