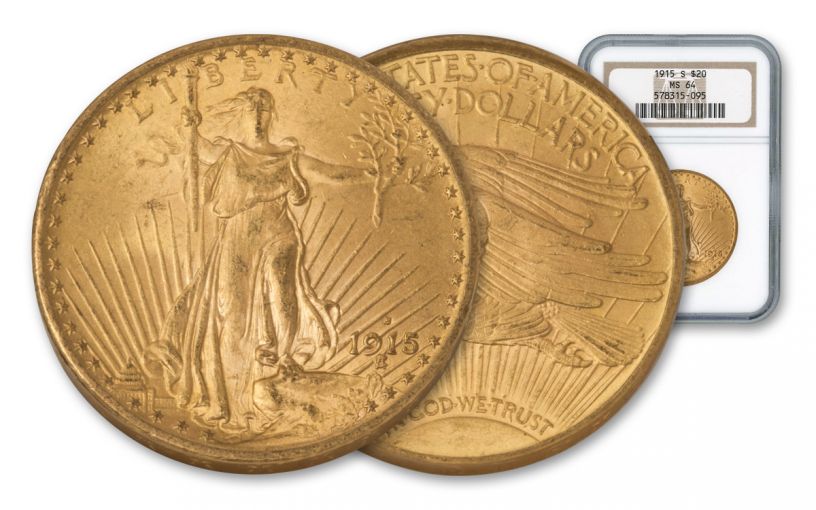 Availability: In Stock
This item will ship within 2 business days.
Item #
331417
CC Payments as low as
$823.75 / month
Add to Wish List Add to Wish List Wishlist is for registered customers. Please login or create an account to continue. Add to Compare
Recommended Products
Product Description

Add This Most Beautiful Gold Double Eagle to Your Collection Now

Gold coin collectors love the hefty nearly one ounce of gold in this $20 Saint-Gaudens Gold Double Eagle struck by the U.S. Mint between 1908 and 1933. But that's only half the story. Designed by famed American sculptor Augustus Saint-Gaudens, it shows Miss Liberty striding toward the viewer and a spectacular Bald Eagle flying in front of the sun. President Theodore Roosevelt proclaimed it to be one of the most beautiful gold coins minted since the days of ancient Greece and Rome. These spectacular gold masterpieces are now available dated from 1908 to 1928, dates vary. Add one right now to your collection graded Mint State 64 (MS64) by Numismatic Guaranty Corporation (NGC) or Professional Coin Grading Service (PCGS).

This $20 “Saint” Gold Double Eagle was minted between 1908 and 1928. It's the last design Gold Double Eagle from the U.S. Mint. Because so many were melted down, finding one in the condition it was in the day it left the mint makes this $20 gold coin a real prize, and a great addition to your collection as an individual coin.

Every year these popular gold coins get harder and harder to find. By securing yours today, you can avoid future disappointment and the uncertainty of future supplies and prices. Order yours now!