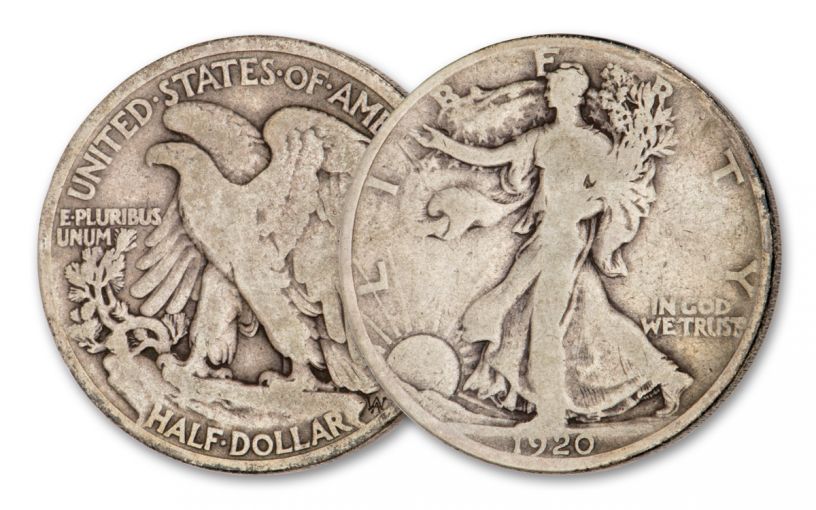 Availability: In Stock
This item will ship within 2 business days.
Item #
361671
Add to Wish List Add to Wish List Wishlist is for registered customers. Please login or create an account to continue. Add to Compare

The First Walking Liberty Half Dollar of the Roaring ’20s

These are the coins that witnessed the Roaring 20s, the Great Depression, and were spent in celebration after the end of World War I. They’re the 1920 Walking Liberty Half Dollars, and 2020 marks their 100th anniversary. But even 100 years later you can still secure coins from each mint that produced the coin. This example of that fabulous coin was struck at the Philadelphia Mint.

Affectionately known to many collectors as a “Walker,” the Walking Liberty Half Dollar is surely one of the most beautiful coins ever struck by the U.S. Mint. In fact, the Walking Liberty obverse famously designed by Adolph A. Weinman is so iconic and beloved that it was resurrected in 1986 as the obverse for today’s Silver Eagles!

Along with the San Francisco and Denver Mints, the Philadelphia Mint was one of just three mints that produced the Walking Liberty Half Dollar in the first year of the 1920s — and now you can secure one in nice Very Good (VG) condition, meaning it actually circulated in commerce! Who knows what this coin has seen and whose hands it passed through?