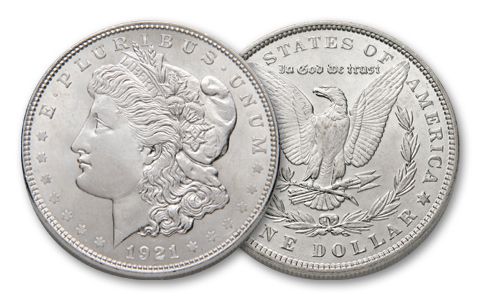 Availability: In Stock
This item will ship within 2 business days.
Item #
221992
Add to Wish List Add to Wish List Wishlist is for registered customers. Please login or create an account to continue. Add to Compare

Own an American Legend

Demand for the heavy silver dollars dried up in 1893 as Americans preferred carrying paper money instead. Mint bags stuffed with Morgan Silver Dollars began piling up in storage. The U.S. Mint finally ceased minting them in 1904 when the Comstock Lode was finally exhausted.

In 1918, Congress passed the Pittman Act to replenish the government's reserves of silver bullion by melting millions of Morgan Silver Dollars in the Treasury vaults. More the 270 million Morgans were melted, almost half the entire mintage from 1879 to 1904.

The Pittman Act also required the government to purchase more silver to replace the melted coins. So the Morgan Silver Dollar was brought back for a single year, 1921.