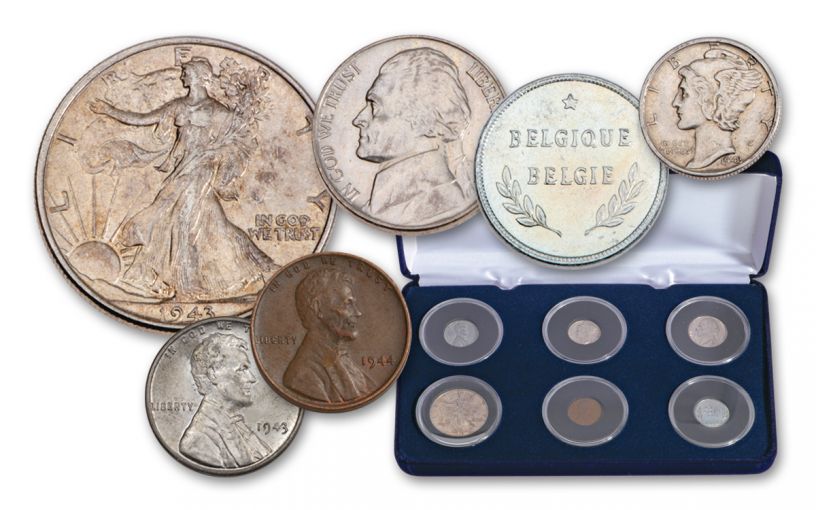 Availability: In Stock
This item will ship within 2 business days.
Item #
315416
Add to Wish List Add to Wish List Wishlist is for registered customers. Please login or create an account to continue. Add to Compare

As World War II raged on, the war effort needed copper, and lots of it! Answering the call, the U.S. Mint turned over their stores, instead striking the 1943 Lincoln Cent in pure American steel with a zinc coating. To celebrate the 75th anniversary of the Steel Cent, we’ve put together a great set that also brings in the 1943 Jefferson War Nickel, 1943 Mercury Dime, 1943 Walking Liberty, the 1944 Belgium 2 Franc coin (struck in the U.S. using the very same planchets as the Steel Cent!) and the 1944 Lincoln Penny, struck using melted down brass/copper shell casings from the war.

These coins were the workhorse coins of World War II and were used every day in transactions ranging from buying a drink at the soda fountain to taking a break and heading to a movie double feature. Placed in circulation 75 years ago during the height of the Second World War, they were symbols of America’s determination to achieve final victory. It’s truly a historic set that tells an incredible story – one made easier in the telling thanks to the storycard you’ll receive describing each coin’s relation to the set. Get your six-coin WWII set now before our limited supply runs out!