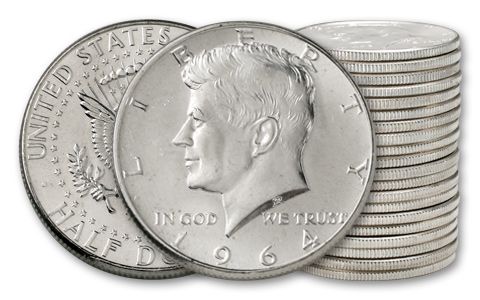 Availability: Out of Stock
This item is currently Out of Stock. Please sign up to be notified if this product becomes available.
Item #
226864
Add to Wish List Add to Wish List Wishlist is for registered customers. Please login or create an account to continue. Add to Compare
Product Description

If you’re of a certain age, you probably have a vivid memory of exactly what you were doing when you first heard the the shocking news of President John F. Kennedy’s assassination. It’s an event that changed the course of history. It also had a lasting effect on U.S. coinage.

In fact, just three days after the tragedy in Dallas, the U.S. Mint started work on the 90% Silver Kennedy Half Dollar. Fittingly, the design selected was one that Kennedy had personally approved for his 1961 inaugural medal.

The new Kennedy Half Dollar would prove to be one of the mint’s most popular half dollar designs right from the start – and within months of its release, Americans were waiting in line for hours at banks across the country. Many left disappointed.

But as grieving citizens scoured the market in search of these treasured mementos, the U.S. was facing a coin shortage that threatened to disrupt the everyday business of the country. One of the reasons? The half dollar struck to honor one of our most popular presidents – a coin so prized it rapidly disappeared from circulation.

The first. The last. The only.

Almost 50 years later, you can still own these historic Silver Kennedy Half Dollars in Brilliant Uncirculated (BU) condition! And as we approach the 50th anniversary of the November 1963 assassination, these first-year Silver Half Dollars are sure to be in demand once again. Order yours now!