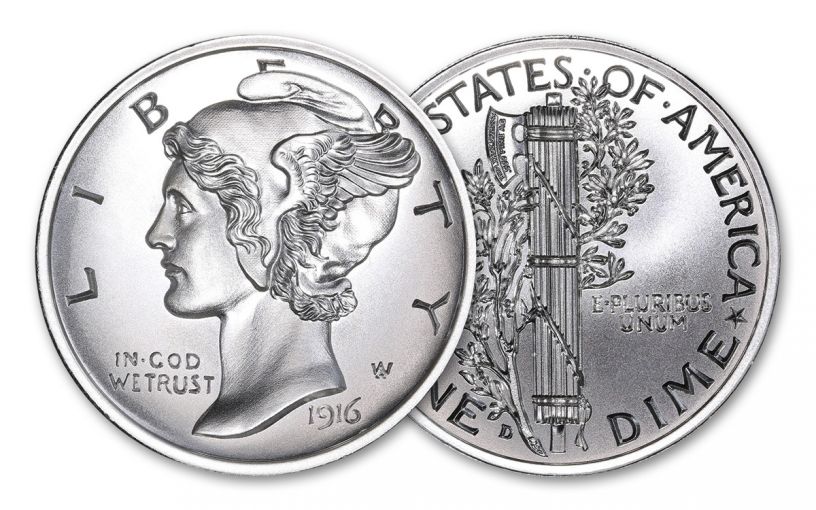 Availability: In Stock
This item will ship within 2 business days.
Item #
352127

Some of the most beautiful coin designs in American history have appeared on some of the nation’s smallest coins. Wouldn’t it have been nice to see these designs showcased on larger coins where all their wonderful details were given the showcase that they so richly deserved? Well now you can! Thanks to a new series, some of America’s most famous designs have been recreated as massive silver dollar-sized rounds!

Struck in two full ounces of highly pure 99.9% fine silver, some of America’s most iconic coins designs – designs that are no longer in circulation – have returned to give you the opportunity to examine them on massive Uncirculated rounds that measure 39 mm in diameter. The massive detail is exquisite, allowing the gleaming designs to shine in a way never before seen.

In this release you’ll be able to discover the celebrated Mercury Dime, a coin that was issued from 1916-1945. One of America’s most beloved coins, the Mercury Dime features an image of Lady Liberty with a winged Phrygian cap that made her look like the Roman god Mercury. Designed by Adolph A. Weinman, the image was so popular that when the U.S. Mint struck its first Palladium Eagle coin in 2017 it selected Weinman’s design! The Mercury Dime was 10 cents legal tender during the Roaring ’20s, Depression-era ’30s and throughout World War II. When it was first released in 1916, it could have purchased a bottle of ketchup, a loaf of bread or a ticket to a silent film.

Add one of these American Coin Treasures Mercury Dime Two-Ounce Silver Rounds to your collection today so you can enjoy Weinman’s classic design for years to come. Also makes a great gift or a great way to add to your private hoard of silver!