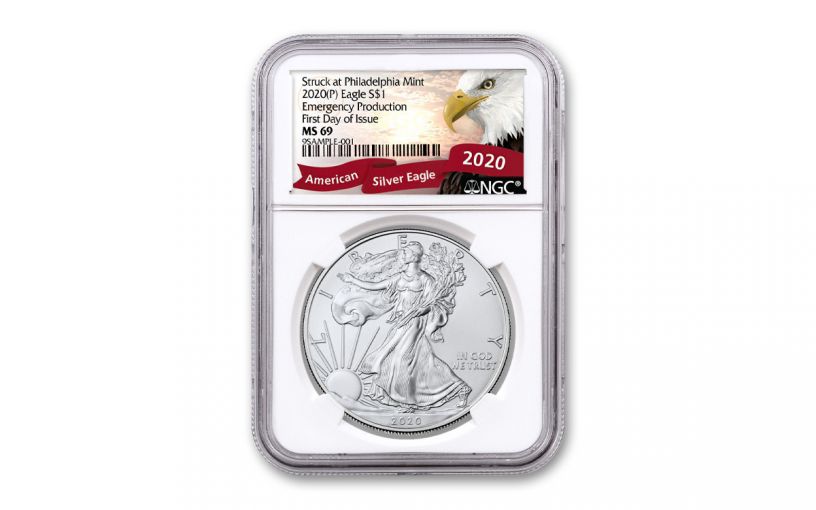 Availability: Out of Stock
This item is currently Out of Stock. Please sign up to be notified if this product becomes available.
Item #
363243

In addition, every bullion Silver Eagle available in this offer has been graded by NGC as being in near-perfect Mint State-69 (MS69) condition, a distinction that means these almost-flawless coins showcase an impressive full strike and indistinguishable imperfections — well above and beyond the quality of the vast majority of coins in the series. Plus, NGC has certified that these Silver Eagles are First Day of Issue (FDI) coins, a designation that means they were received by NGC or an NGC-approved depository by the release date or on the business day within 24 hours of the official release date. Each will also come sonically sealed in an acrylic holder with an exclusive Eagle label.

SPECIAL EMERGENCY DESIGNATIONS – This coin will be sonically sealed in an acrylic holder with an exclusive Eagle label that identifies it as a “Struck at Philadelphia Mint” and “Emergency Production” issue.

KEY FIRST DAY OF ISSUE CERTIFICATION – NGC has certified that this Silver Eagle is a First Day of Issue (FDI) coin, independent authentication that your coin was released by the mint during the premier day of the series' issue.