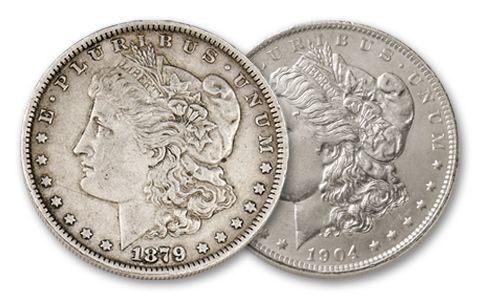 Availability: In Stock
This item will ship within 2 business days.
Item #
228869
Add to Wish List Add to Wish List Wishlist is for registered customers. Please login or create an account to continue. Add to Compare

First and Last Morgans from the New Orleans Mint

The historic New Orleans Mint struck its first Morgan Silver Dollars in 1879 and its last in 1904. Here's your chance to own one from each year! These coins mark both the 'Wild West' days of the 1800s and the Turn of the Century. Today, they are two of the key dates and mint marks of any Morgan collection. The 1879-O is in collector grade Extremely Fine condition and the 1904-O is in Brilliant Uncirculated condition.