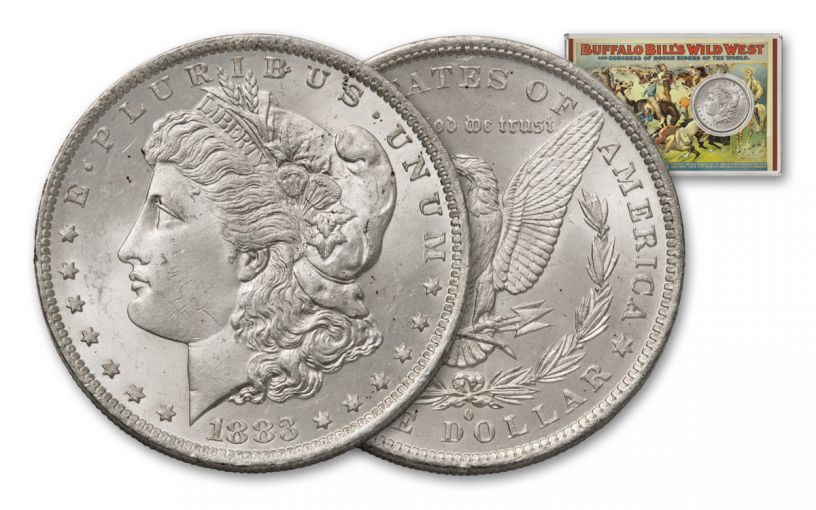 Availability: In Stock
This item will ship within 2 business days.
Item #
252587
Review this product
Add to Wish List Add to Wish List Wishlist is for registered customers. Please login or create an account to continue. Add to Compare
Related Articles
Product Description

Today, we’d call it a hit reality show. But on May 19, 1883 in Omaha, Nebraska, no one in the U.S. had ever seen anything quite like it! This new-fangled entertainment was William F. "Buffalo Bill" Cody’s Wild West Show –an outdoor extravaganza featuring riding, roping, real buffalos, and genuine cowboys and Indians direct from America’s frontier. In its day, it was a spectacle unlike any other, touring the country for three decades and playing to enthusiastic crowds across Europe – England’s Queen Victoria enjoyed it so much, she saw it three times!

Riding side-by-side with Buffalo Bill’s Wild West spectacle were these fabulous Morgan Silver Dollars. These big silver coins could easily have paid for an entire family’s admission to the show’s debut performance – a coin like this might even have been tucked away in Mr. Cody’s vest pocket as he rode pell-mell into the arena!

The Morgans we have available in this offer were all struck at the fabled New Orleans Mint in 1883 when Buffalo Bill first began playing to sold-out shows and cheering audiences across the country. The epitome of Wild West currency, the Morgan Dollar was struck from silver mined from Nevada’s famous Comstock Lode. These 90% silver coins were the largest silver coins in circulation and were more accepted than paper currency out West. Not only are you getting an authentic piece of Wild West history, but your coin will also come graded in gorgeous Brilliant Uncirculated (BU) condition – a premium condition desired by collectors!

It’s also interesting to note that your coin was struck by the U.S. Mint’s branch mint in New Orleans. The New Orleans Mint is the only U.S. branch mint that was operated under the control of three different governments during its existence; the United States, the State of Louisiana, and the Confederate States of America. For that reason, Morgan Silver Dollars struck at the New Orleans Mint are among the most coveted! Your 1883-O Morgan will also come housed in a protective acrylic sleeve that features an informative storycard about Buffalo Bill and his Wild West Show.

Hundreds of millions of Morgans were minted between 1878 and 1904, and again in 1921. Unfortunately, finding any quantity of these historic 135-year-old silver dollars has become increasingly difficult with every passing year. That’s because thanks to the Pittman Act of 1918 and other silver meltings, it’s estimated that only 15% of all the Morgan Silver Dollars ever struck have survived to this day. And even fewer exist in Uncirculated condition!

But more than a century later, you can still pocket a genuine 1883-O Silver Dollar – in the same condition as when it first rolled off the presses! It’s a legendary piece of American Wild West history and a vintage silver dollar no Morgan collection should be without. Order yours now!