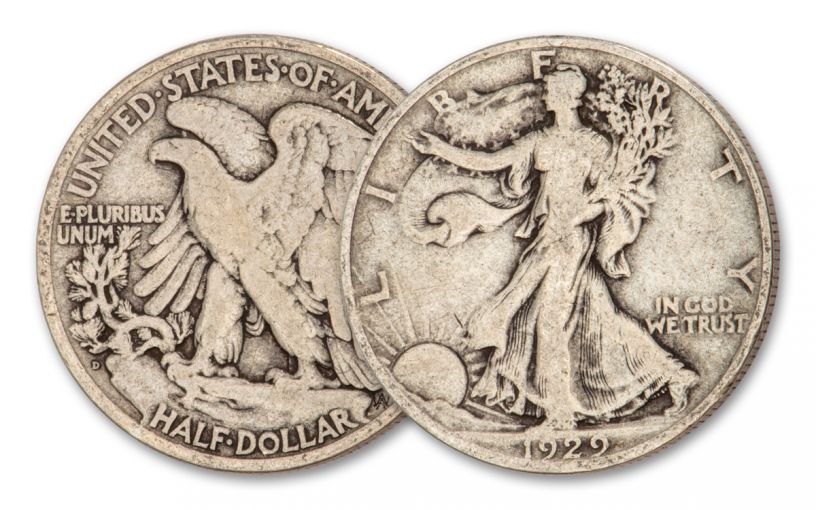 Availability: In Stock
This item will ship within 2 business days.
Item #
367377
Add to Wish List Add to Wish List Wishlist is for registered customers. Please login or create an account to continue. Add to Compare
Recommended Products
Product Description

In 1929, the stock market crashed, sending the United States spiraling into the Great Depression. The effect was felt all over the country — including the U.S. Mint. So much so that the Walking Liberty Half Dollar wasn’t struck again until 1933! This 1929 Half Dollar was struck at the Denver Mint, responsible for just 18% of the entire series. It also comes in Very Good (VG) condition, meaning it actually changed hands in commerce. How many times did it change hands during the Great Depression before someone squirreled it away for its precious metal content? Let your imagination run wild!

Struck in 90% fine silver, this coin is affectionately known to many collectors as a “Walker.” With its iconic images, the Walking Liberty Half Dollar is surely one of the most beautiful coins ever struck by the United States Mint. Lady Liberty is shown striding towards the sun, her right hand open and outstretched as if in invitation. In her left arm is a bouquet of olive branches. The coin’s reverse depicts a stylistic eagle standing on a rock ready to take flight. A mountain pine sapling springs from the rock, symbolizing America. Famously designed by Adolph A. Weinman, the Walking Liberty is so iconic and beloved that it was resurrected in 1986 as the obverse for today’s Silver Eagles! This patriotic design always proved difficult to strike, meaning that finding circulated specimens in nice condition can be difficult.

On October 29, 1929, Black Tuesday hit Wall Street. Here’s your chance to get a key-date 1929 Walking Liberty Half Dollar struck at the Denver Mint during that fateful year. Order yours now!

Here’s your chance to get a Walking Liberty Half Dollar struck during 1929 — the year of the Stock Market Crash. Order yours now while they’re still available!