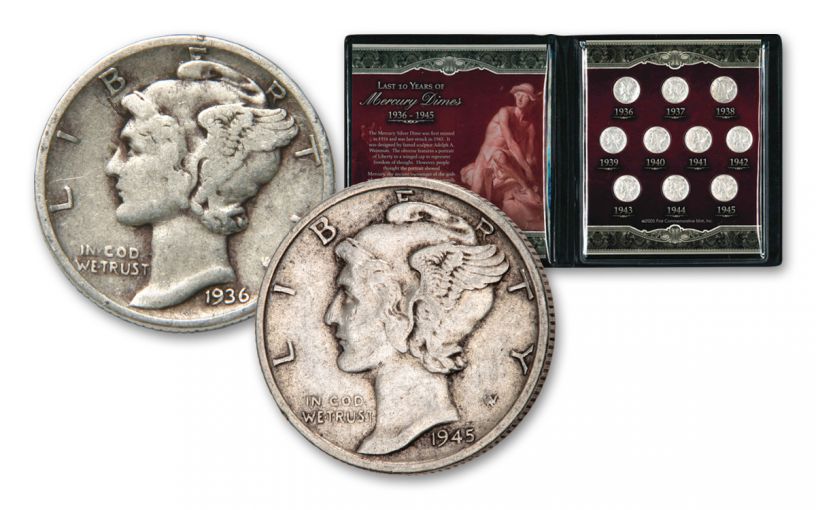 Availability: Out of Stock
This item is currently Out of Stock. Please sign up to be notified if this product becomes available.
Item #
357343
Add to Wish List Add to Wish List Wishlist is for registered customers. Please login or create an account to continue. Add to Compare
Recommended Products
Product Description

Last 10 Years of the Mercury Dime

The unique image of Liberty with a winged cap that appeared on American dimes in the first half of the 20th Century have come to be known as the “Mercury Dime” due to its likeness to the Roman god of shopkeepers, merchants and travelers. Originally known as the Winged Head Liberty Dime, the Mercury Dime was issued from 1916-1945 and jangled in the pockets of our Greatest Generation, enduring through the Roaring 20s, the Great Depression and World War II. This 10-coin set brings together the final 10 years of the series.

In the century since it was first issued, the Mercury Dime has gone on to become one of America’s most beloved coins. In addition to its iconic design of Lady Liberty with a winged Phrygian cap that makes her look like the Roman god Mercury, the coin’s reverse depicts a fasces symbolizing unity and strength, and an olive branch, signifying peace. Designed by famed German-born American sculptor Adolph A. Weinman, the image was so popular that when the U.S. Mint struck its first Palladium Eagle coin in 2017 it selected Weinman’s design!

Each coin in this historic, coveted and sought-after collection was struck in 90% fine silver and the entire set comes beautifully housed in a custom display folder. Many of these coins have been worn down through circulation or melted for their silver content, making it difficult to compile a set of this quality. But we’ve done it, and now it’s up to you to secure it for your collection!

LAST DECADE OF ISSUE – “Firsts” and “Lasts” are always important to collectors. The Mercury Dime was struck from 1916-1945, meaning these coins minted from 1936 to 1945 represent that last decade they were struck.

BEAUTIFUL CLASSIC DESIGN – The Mercury Dime features the iconic image of Lady Liberty with a winged Phrygian cap that makes her look like the Roman god Mercury. Designed by Adolph A. Weinman, the image was so popular that when the U.S. Mint struck its first Palladium Eagle coin in 2017 it selected Weinman’s design!

STRUCK IN HIGHLY-PURE SILVER – Each Mercury Dime was struck in 2.5 grams of highly pure 90% fine silver and measures 17.9 mm in diameter.

UNITED STATES LEGAL TENDER—The Mercury Dime was 10 cents legal tender in the United States at a time when a dime could purchase a Superman comic book, a loaf of bread or two bottles of Coca-Cola.

Get the last-year decade of Mercury Dimes now by clicking this ten-piece set to you cart right now!