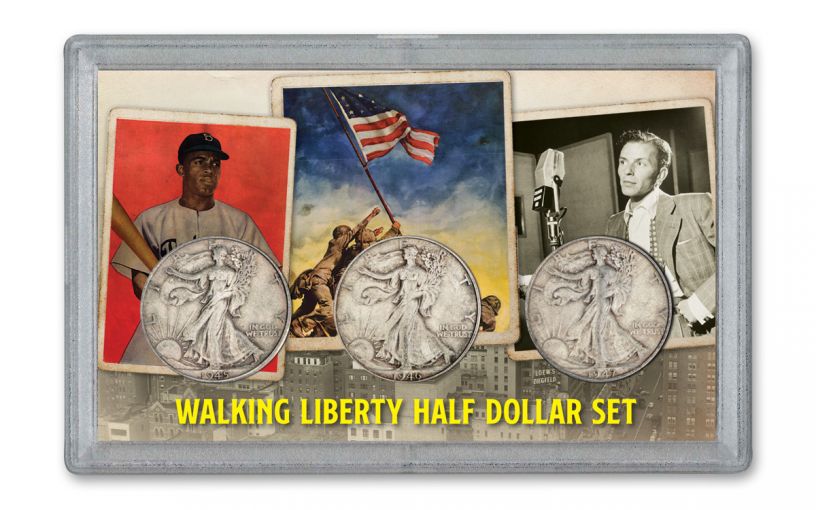 Availability: Available for Order
This item will ship 04/05/21
Item #
345250
Add to Wish List Add to Wish List Wishlist is for registered customers. Please login or create an account to continue. Add to Compare

Last Three Years of the Denver Walking Liberty Half Dollar

The beautiful Walking Liberty Half Dollar was struck from 1916 through 1947, and as its name implies displays a glorious design of Lady Liberty striking from left to right. Designed by famed sculptor and engraver Adolph A. Weinman the image was so revered that it was resurrected in 1986 for the U.S. Silver Eagle – the most widely collected silver coin in the world.

Unlike today’s Silver Eagle, however, this 1945–1947-D three-piece set can be tough to locate, since the Denver Mint struck only 18% of all Walking Liberty Half Dollars! Look elsewhere and this set could cost you as much as $80. Not only have we done the work for you and housed all three coins in a clear holder with a custom insert, but you’ll also save over $10! All three come in Very Fine (VF) condition with beautiful complete details.

Think of how incredible it will be to show off the last Walking Liberties ever struck at the Denver Mint. Don’t wait for these incredible sets to disappear – secure yours now!

This 1945-194D Half Dollar Walking Liberty Three-Piece Set is a great way to start, add to, or complete your own collection of “Walkers.” Don’t let these coins walk away; order your set today!