Gold has been in the news recently as spot prices hit a six-year high, reaching more than $1440 per ounce. Gold has also been in the headlines recently because of news related to the world’s two largest gold coins.

The Largest Gold Coin in the World: 1 Ton Gold Kangaroo 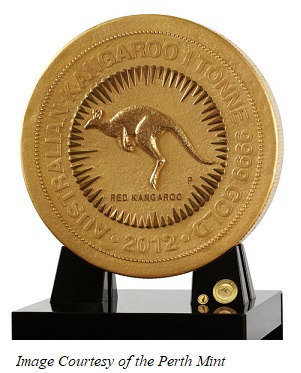 The first is the 2011 One Ton Australian Kangaroo gold coin created by the Perth Mint in Western Australia to showcase the mint’s popular gold Kangaroo series that began in 1989.  The coin, whose reverse design of a bounding red kangaroo surrounded by stylized rays of sunlight was created by Stuart Devlin, is the world’s largest, heaviest and most valuable gold coin with over 2,200 pounds of 99.99% pure gold. It has a diameter of a whopping 80 centimeters, or almost three feet, and is almost five inches thick. Although its face value is only $1 million AUD, the coin is worth about $50 million at today’s gold price, making it also the most valuable coin of any type just from its gold value.

In 2012 the coin was entered into the Guinness Book of World Records as the largest gold coin in the world.

This coin, which went on a promotional tour in Asia and Europe in 2014, was sent all the way to New York City for a one-day exhibit on July 16 just outside the New York Stock Exchange to help promote the Perth Mint’s new gold exchange-traded fund, Perth Mint Physical Gold (AAAU). Unlike other gold ETFs linked to future prices, this fund is the only gold ETF that is backed up by gold stored securely at the mint. In addition, the fund allows even small-time investors to redeem their shares for physical gold for a small fee. It also includes an explicit guarantee backed by the Treasury that covers the cash equivalent of the gold.

The Big Maple Leaf: the Heist 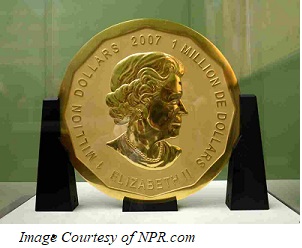 The amazing Australian gold coin is ten times heavier than the previous world-record gold coin, a 3,215 ounce, or 220-pound, gold coin known as The Big Maple Leaf (BML) issued by the Royal Canadian Mint in 2007 that was the first to carry a legal tender value of $1 million (CAD). After the original coin was produced, the mint struck five more examples for private investors, and as of March 2017 they had a gold value of about $4 million each.

In 2010 the owner of one of the coins lent it to a museum in Berlin. On March 27, 2017 – the day it was supposed to be moved to another museum, thieves stole the huge coin in 16 minutes during a carefully planned heist accomplished with the help of a museum employee who advised the robbers of security measures. In July 2017, German police arrested several suspects who come from a family known for ties to organized crime, and their trial began in January 2019.

The location of the coin is still not known, and experts believe it is unlikely to ever be recovered because they believe the thieves cut it into pieces and/or melted it down to make it easier to sell. They found a lot of gold dust on their clothing and a car.

Benedikt Kammel and Karin Matussek, “It Took Only 16 Minutes for Thieves to Swipe a Million-Dollar Gold Coin,” www.bloomberg.com, June 28, 2019