The Parts of A Coin 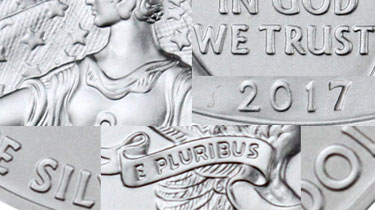 Many people will say that the only parts of a coin they could identify are Heads and Tails. But as one develops an interest in coins, you soon learn that there are no less than 14 major parts to most any coin!

Obverse:  The "Heads" side of a coin. It usually bears the coin's date and the portrait design.

Reverse:  The "Tails" side of a coin. On many annually-issued coins, it is the reverse side that changes design, while the obverse portrait often remains unchanged.

Portrait or Bust:  Generally considered the main part of a coin's design. Common portraits which appear on coins include past presidents, kings and queens, or symbolic figures embodying concepts such as Liberty, Freedom, etc.

Field:  The flat area that surrounds a coin's raised design or Relief. On a proof coin, the field can often be polished to a mirror-like finish.

Motto:  Secondary lettering which may appear on a coin to convey a saying or short phrase such as "In God We Trust" or "E Pluribus Unum" (which translates to: Out of Many, One.)

Legend or Inscription: The principal lettering or inscription on a coin. The legend may often contain the name of the country, the name of the ruler who is portrayed, or an important theme such as Liberty.

Relief:  The parts of the coin's design which are raised above the coin's surface, or Field. Coins can be struck in many degrees of relief, from low-relief circulation coins all the way to Ultra High Relief collector coins.  On many proof coins, the relief areas may be frosted in order to create a strong contrast with the mirrored fields.

Date:  Most coins bear a date signifying when they were struck. Many coins are prohibited by law to be struck after the year of their date has passed. But there are a few examples of historic coins or commemoratives which have been struck outside of the year whose date they display. Certain commemorative coins may be dual-dated, such as U.S. Bicentennial coins which bear the date 1776-1976.

Rim:  The raised portion of a coin's face which runs around the edge. The rim of a coin is often made to be slightly higher than the coin's relief in order to help protect the design by reducing surface wear. For circulation coins, the rim makes the coins more easily stackable.

Edge:  The very outer sides of the coin. Because the edge can be treated many different ways, it is sometimes referred to as a coin's "third side". Edges can be plain, reeded, or they may bear lettering or decorations.  Relatively few U.S. coins have historically been edge-lettered, but the current Presidential Dollar series utilizes edge lettering for the mint mark, the date, and the motto.

Mint Mark: Small letters struck onto the coin to indicate where the coin was minted. U.S. coins generally feature mint marks such as "D" for Denver, "S" for San Francisco, "W" for West Point, "O" for New Orleans, "CC" for Carson City, and "P" (or no mintmark) to indicate the Philadelphia Mint.

Designer's Initials:  Depending on the coin and the country of issue, the initials of the designer may appear in small letters somewhere on the coin. Designers are not always allowed to "sign" their designs, however. There are some coins in history, such as the VDB Lincoln Cent, which are actually more in demand because they bear the designer's initials compared to the rest of the series in which the initials were omitted.

Denomination:  The face value of a legal tender coin, such as One Dollar, $5, 20 Euros (EU), or Ten Pounds (Great Britain.)

Learning the parts of a coin should give you greater enjoyment as you inspect the coins within your collection.  Of course, the U.S. Silver Eagle pictured here is just one example. The locations of the various coin parts can vary greatly from country to country and coin to coin.  In addition, not every coin may contain every single part described here.

See the illustration below for an example of how the parts of a coin vary somewhat on a vintage coin such as the Morgan Silver Dollar.