The Use of Animals in Ancient and Modern Coins 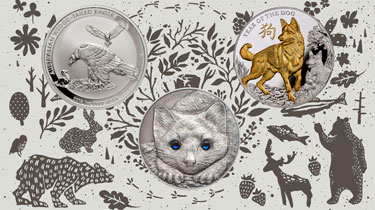 Animals, both domesticated and wild, seem to have always fascinated man. Whether in the form of Roman military standards (ensigns), coins or sacred totems that feature animals – all seem to be bearers of powerful animal symbols that played a pivotal role in awareness and self-expression.

The use of animals on coins, including birds, is as old as coins itself. Different animals are featured on many coins – too many to mention here. Some coins even feature two or more animals. E.g. the rare ancient coins that were issued by Hadrian feature an eagle alongside an owl and a peacock. This makes for a fascinating variety of coins with animals to collect, both ancient and modern.

Horses and eagles seem to feature most frequently on ancient coins. Rare animals such as elephants, lions and turtles are also featured. On the other hand, modern coins feature almost every animal imaginable.

Let’s consider a few ancient and modern coins with animals - coins that feature animals or animals on coins. The focus will be on a limited selection of animal coins that feature – in no specific order: Lions, horses, dogs, wolves and birds, including eagles and owls. 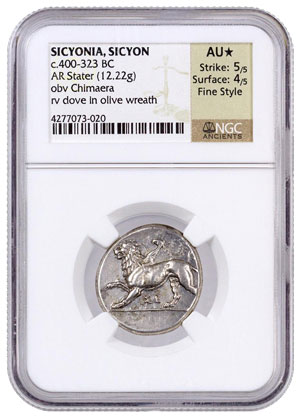 The Lydian Third Stater or Lydian Lion Trite (1/3 of a Stater) – described by some as “The Coin” – is for all intent and purposes the first coin that was ever minted (c. 610-600 BC). Evidently, it is also the first coin in recorded history to feature a lion (or at least part of a lion).

A lion’s head is featured on the Lydian Lion Trite’s obverse and a punch mark on its reverse. The punch mark was left by an incuse punch, a punch used in the manufacturing of ancient coins in the early days – the very beginning of coinage.

The lion is seen as the undisputed King of the Jungle – a symbol of kingly authority based on raw power and strength. This must be the reason why King Alyattes, King of Lydia (619–560 BC) and Founder of the Lydian Empire (present-day Western Turkey), wanted to see a lion’s head on coins minted under his authority.

This was later followed by the manufacturing of what is known as the “Kings of Lydia” Stater - in all likelihood the first pure gold coin ever minted. It was minted under the authority of the Lydian King Croesus (561-546 BC). A lion facing to the right and a bull facing to the left are featured on its obverse.

Another ancient coin worth mentioning is the impressive Greek Silver Stater of Sicyon of more or less 400-232 BC. This rare coin features the chimera lioness on its obverse – a lion-like creature that forms part of Greek mythology.

The term “modern” is loosely used here to refer to all non-ancient coins. Unlike its ancient counterparts, it seems that a much greater selection of modern coins feature lions.

Interestingly, the recently released 2017 Lions Club Commemorative Dollar seems to be the first United States coin to feature a lion(s).

The influence of the 1781 Libertas Americana Medal on the Liberty Cap coinage of the then young, upcoming United States is also worth a mention.

This well-known medal features among other design elements, a British Lion – symbolic of the British armies that were defeated at Saratoga and Yorktown. This might be the reason why lions – as a rule of thumb - are not featured on US coinage (except for the 2017 Lions Club Commemorative Dollar and perhaps a couple of private issues).

Furthermore, the 1927 Vermont Sesquicentennial Commemorate Half Dollar, which commemorates the Battle of Bennington, hits close to the mark. The mountain lion, cougar, panther, puma or catamount is featured on its reverse. Unlike a lion, this majestic animal cannot roar - it purrs like a house cat. 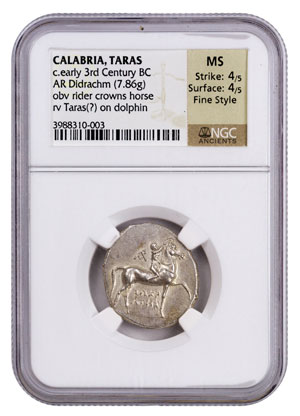 There are plenty of ancient horse coins out there to collect, some more rare than others. The focus will be here on a couple of the very rare ones.

The first horse coins were minted and issued around 600-550 BCE in the form of rare electrum pieces. These pieces feature the front section of a horse. It were minted by an unknown mint in Ionia on the coast of Aegean (present-day central coastal Anatolia in Turkey).

Other rare ancient coins that feature horses – too many to name here - include the Gold Stater of Egyptian pharaoh, Nektanebo II (360-342 BCE). This exceedingly rare horse coin features an impressive depiction of a “prancing” horse.

Interestingly, the horse is the animal that features the most on ancient Roman coins, followed by the eagle and then the wolf (in particular the she-wolf that cared for Romulus and Remus).

Various modern coins that feature horses were and are being issued by various mints across the world - enough to cater to almost every collector of modern horse coins out there.

There is for one the option to focus exclusively on collecting US coins that feature horses, including US bullion coins. Here is a list that covers the bulk of them:

• 2015 US Marshals Commemorative Half Dollar – U.S. Marshals and a horse (obverse).

It is not strange to find a dog(s) on ancient coins. The dog was treasured by the ancients and treated as a member of the family. It served as guardian, hunter and trustworthy companion.

In short: The dog rightfully earned the right to be called “man’s best friend.”

A few examples of ancient dog coins (not ugly) include: A rare ancient coin of unknown denomination (AE13) circulated in Thrace, Madytos (circa 350 BC). It features a dog seated to the right and an ear of grain behind it (obverse). Another one of an extremely rare type – an AES grave Semis of the Roman Republic (circa 235 BC) – features a sleeping dog (obverse).

Many collectors of ancient coins that feature dogs seem to have a preference for the beautiful coins of Segesta in Sicily – one of the top cities that was inhabited by the ancient Elymian people. Segesta was a highly successful place of trading during ancient times. This was before the Vandals – an East Germanic tribe – destroyed it.

The dog is one of the distinct symbols associated with Segesta. This certainly had a strong influence on their coins. E.g. one such coin, a very rare Silver Didrachm (461-415 BC), features a hound on scent (obverse). Another example is a bronze Triantes of Segesta that was struck in 410-400 BC. 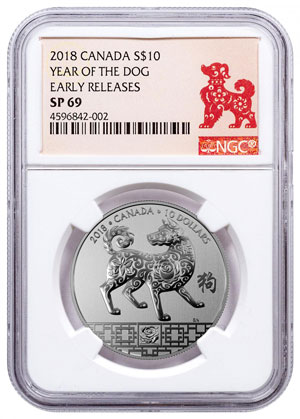 Collectors of modern coins with dogs can choose from many different world coins that feature dogs. Strangely, it seems that no United States coin exists that was officially issued featuring a dog.

One of the most famous ancient wolf coins is probably the commemorative Bi Nummus (AD 330-340) that was issued during the reign of Constantine the Great - Constantine I.

This Roman bronze coin features the legendary twins, Romulus and Remus – the mythical founders of Rome – suckling on a she-wolf (reverse). It was issued to commemorate the founding of Rome and the establishment of Constantinople (present-day Istanbul in Turkey). Constantinople was previously known as Byzantium (until AD 330).

Another ancient wolf coin that is worth a mention is the Silver Hemidrachm that was struck in 468-421 BC in the city of Argos in Argolis. The obverse features the forepart of a wolf facing left. Coins later issued feature the wolf facing right.

There is a great selection of wolves on modern coins available to collectors of wolf coins. However, it seems that the only US coin that features a wolf is the 2013 Sacagawea Dollar – turkey, wolf and turtle (reverse).

Birds enjoyed a prominent place in ancient cultures – in some more than others. The focus will be here on eagles and owls, especially considering that the eagle is probably the bird most featured on ancient coinage. The owl features less, but was certainly a prominent symbol used on the coinage of Ancient Greece.

Part of the ancient world had a fascination with eagles, including Ancient Rome. The Romans made extensively use of the eagle or Aquila as a symbol on their military standards and coinage.

Today we have access to a wide selection of ancient eagle coins, including a healthy variety of Tetradrachms with eagles struck at the ancient Greco-Roman city of Antioch – “the cradle of Christianity.”

The eagle on these Tetradrachms seems to be almost always presented in a bold manner. A further plus is the many rulers of interest that are featured, which makes it a highly attractive ‘series’ to collectors.

The owl, a symbol of wisdom, was seen as the helper of the Greek virgin goddess, Athena – a personification of the city of Athens. It was no strange occurrence when this city, the heart of Ancient Greece, started to mint coinage that feature the Athene noctua or little owl (440-404 BC).

The ancient people referred to these coins as “Owls.” Athens became famous for the “little owls” on her coinage, especially on the back of the resulted increases in trade and competition – signs of a healthy economy.

Other ancient cities and places also minted their own coinage that feature owls. However, no noteworthy collection of ancient owl coins is completed without the “Owls” of Athens, including the impressive Athens Silver Tetradrachm (440-404 BC) of the Owl and Athena. This impressive coin features an owl, olive spray and moon (reverse) as well as the goddess Athena (obverse). 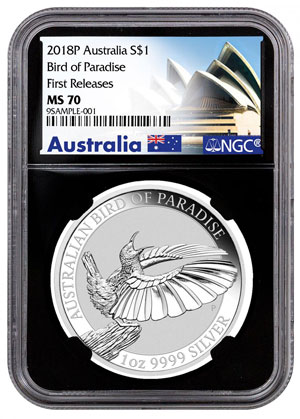 Collectors of bird coins are spoilt for choice when it comes to birds on modern coins, including eagles and to a lesser extent owls – pretty much the same as with ancient coins.

Like with ancient Roman coinage, it is hard to think of US coinage and exclude eagles. Eagles appear on many US coins, including many US bullion coins such as the American Silver Eagle – heraldic eagle design (reverse), the American Gold Eagle – eagle soaring above nest (reverse) and the American Platinum Eagle – various eagle designs (reverse).

There are many other US eagle coins that stand out, but to list a few:

The 1915-S $50 Panama-Pacific Exposition gold commemoratives – round and octagonal - seem to be the only US coins that feature an owl (reverse). These gold coins - issued to celebrate the 1915 Panama Pacific International Exposition - sell for thousands of dollars today. A more affordable alternative, although not a US coin, is the 2015 Gilt Niue S$2 Panama-Pacific Commemorative.

This impressive 2 oz. .999 fine silver coin was issued to commemorate the 100th anniversary of the 1915 Panama Pacific International Exposition – an exposition that was held in San Francisco in 1915 to celebrate the opening of the Panama Canal.